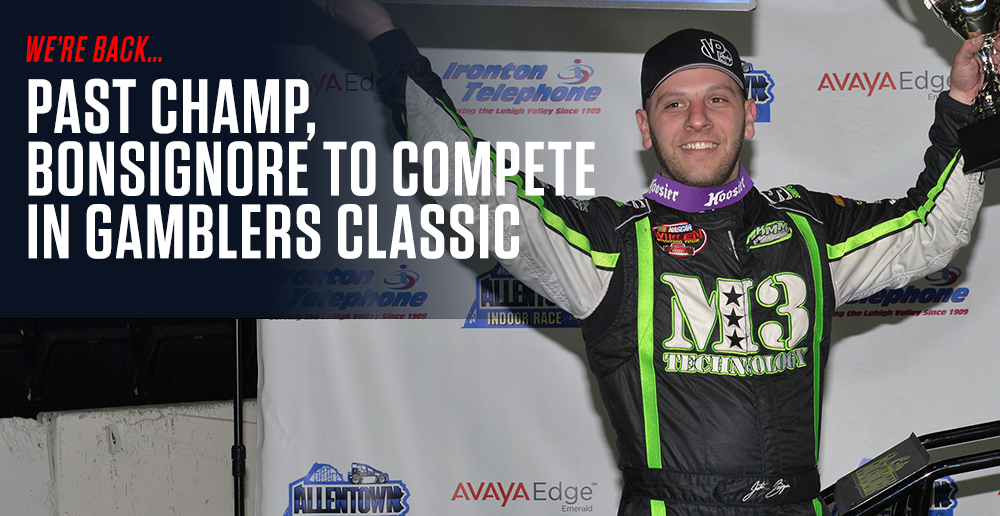 Bonsignore will drive Jason Simmons’ No. 98 TQ, the same car that was driven to a Qualifier victory and a top ten A Main feature finish in Allentown, PA two weeks ago by Billy Pauch, Jr.

Simmons, of Fulton, NY, will enter a second TQ Midget, No. 97, with the driver to be determined. He has also filed entries for a pair of Champ Karts,
Bonsignore and Simmons struck a deal less than two weeks prior to the Atlantic City race.

“I have never been able put together a full TQ weekend there though I have run pretty well at times. I’ve had pretty good success overall with the Indoor stuff, but just not as much as I would have liked to have had,” Bonsignore said.

“When Justin raced TQ Midgets with us before, he was a threat the first time he got behind the wheel He’s won before and he can be a contender again,” Sammons noted.
Bonsignore, 34, has three career Indoor Auto Racing Series wins to his credit, in two classes, and in three buildings.

In January 2018, Bonsignore won his first TQ Midget race, in the PPL Center in Allentown, PA. That winning ride set up his run to the 2018 Series championship.
He followed that up with a win at the Syracuse, NY Expo Center on March 8, 2019.

Erick Rudolph and car owner Mark Lafler are returning to Boardwalk Hall after missing the Allentown race. The team has won three Gambler’s Classics together.
Promoter Sammons noted the importance to the Indoor Auto Racing Series of the Atlantic City Races, first introduced by Sammons in 2003.

“Indoor Auto Racing is a spectacle in itself, and when the racing is as tightly contested as it was in Allentown a few weeks back, the fans had to be leaving eager for more,” said Series promoter Len Sammons.

Good tickets for the Atlantic City races are on sale now in a range of prices through Ticketmaster, the Boardwalk Hall Box Office or the Area Auto Racing News office at 609-888-3618 weekdays from 10 am to 4 pm.

New for 2022 will be an expanded reserved seating option in Atlantic City. Upper reserved seating has been expanded to include all of sections 209 through 217. General admission seats will be still be available in sections 202-208 and 218-225 for those wishing to purchase those tickets or holding a pit pass.

“The upper level seats in the corner in Atlantic City offer some of the best views of the track, this change will allow people the option to secure their favorite seat in advance,” stated Len Sammons.

First-time Boardwalk Hall TQ entrants include versatile Max McLaughlin, second-generation New England Modified standout Mike Christopher Jr., Shea Wills, in the elderly but still very quick Tim Adams TQ, Champ Kart standout Doug Stearly who will be driving Ken Sebring’s TQ Midget, and Tyler Lindsay, who, in first Indoor ever TQ Midget start in Allentown earlier this month came within a quarter of inch of qualifying for the A Main, but was disqualified by a post-race tech width violation.
No less than four Catalano brothers, from upstate Ontario, NY, are entered for Atlantic City. Timmy, Tommy and Trevor will run TQ Midgets; youngest brother Tyler will campaign a Champ Kart.

Some 31 Slingshots are entered from four states, 27 from New Jersey or Pennsylvania and two each from New York and Quebec.

A closed-to-the-public practice night will again be held on Thursday evening January 27.

New Jersey State public safety rules require the wearing of face covering upon entry into Boardwalk Hall, and recommends wearing of masks when in concourses and walkways inside the building. Masks are not required when seated nor when consuming food or beverages.