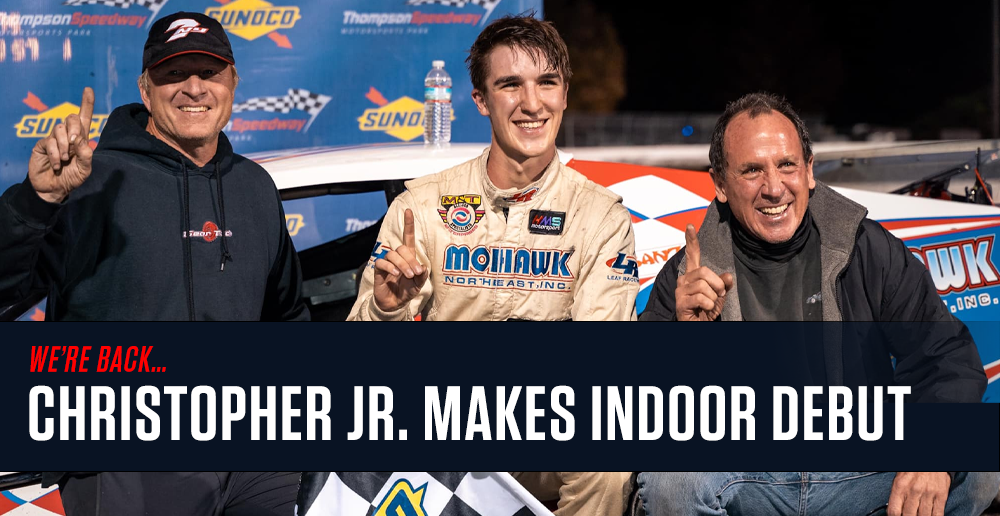 Allentown, PA – Highly regarded asphalt Modified specialist Mike Christopher, Jr., will make his TQ Midget Indoor Auto Racing Series debut on Friday and Saturday, January 7-8 during the Ironton Global sponsored Allentown Indoor Race inside the PPL Center in downtown Allentown, PA.
Christopher, 22. of Wolcott, CT, will be driving a new car owned by Trey Hoddick of Buffalo, NY. Scott Kreutter of Alden, NY, an experienced TQ Indoor racer, will be Christopher’s teammate.
Christopher’s car will carry the No. 82 in the Indoor Auto Racing Series events.
“Trey said I could put any number on the car I wanted so I’m bringing the number 82 from my Modified,” he shared.
Tickets for the two days of racing in Allentown are on sale now. To order online visit www.pplcenter.com. Tickets may also be purchased in person at the arena box office, open every Tuesday and Thursday and during events hosted at the arena including Lehigh Valley Phantoms games.
Christopher said he had been prepared to race in the 2020 Indoor Auto Racing Series finale.
“I was going to run the last race of season in Syracuse. We were all set to go the day before. I was ready to leave and before I did, the whole thing got shut down because of COVID.
“The car has been sitting on a shelf since then. I called Trey a few weeks ago, and he said, ‘a deal’s a deal’, everything’s ready to go,” Christopher shared.
Christopher. who stands six feet inches, said one of his main obstacles he must face is getting comfortable in the close TQ Midget cockpit.
“I had a problem getting my knees to fit in and at the same time get my head low enough. I’m bringing a bunch of padding with me to help with that. 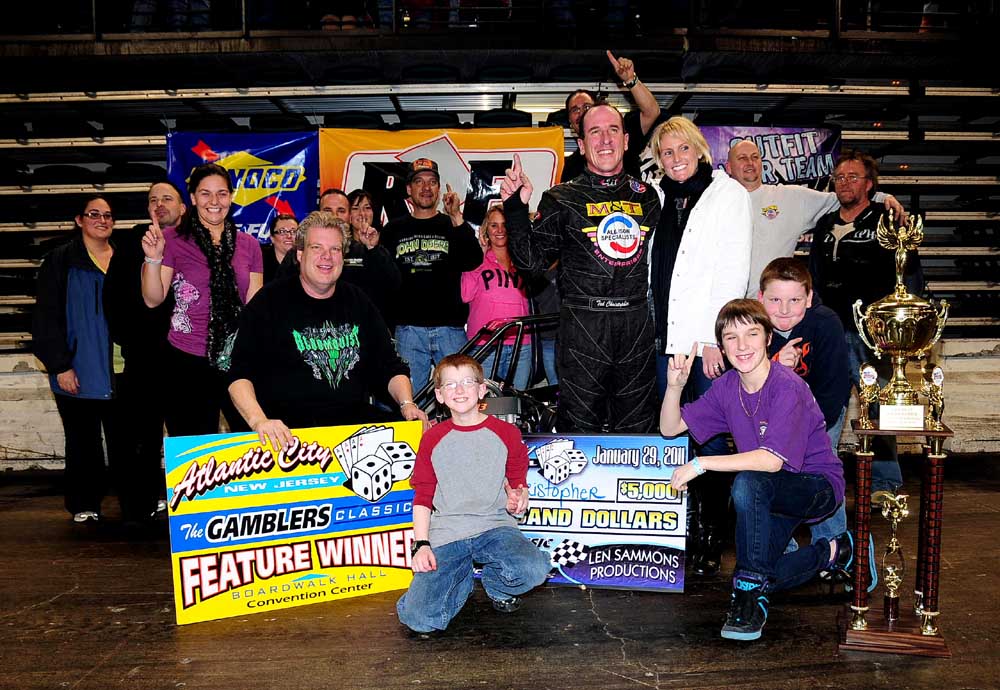 “What I want to do is come into the Allentown race, make the feature and come out of there clean and with a plan for the next race. If I can’t get comfortable in the car, I’ll just have to suck it up,” Christopher bottom-lined.
Ironton Global and Ironton Telephone and Internet are Allentown Indoor Auto Racing Series title sponsors.
Ironton Global, the leading international provider of cloud-based communication services, headquartered in Coplay, PA, is the title sponsor for the Allentown event.
The Allentown event, as well as 2022 Series events in Atlantic City, NJ and Syracuse, NY are being presented by BELFOR Property Restoration Services, provider of professional 24/7 residential and commercial restoration services.
Future Homes of Kunkletown, PA, a home construction company, specializing in residential, multi-family, and energy efficient buildings, has also returned as the presenting sponsor for the Saturday night card of racing in Allentown.
Though he has yet to turn a wheel in a TQ Midget, Christopher has seen his share of highlight reel footage. His late uncle Ted won five TQ Indoor features and back to back Series titles, in 2010 and 2011.
“I wish I could talk to him and ask him questions about Indoor racing. I saw him have so much success in Indoor races,” Christopher admits. “I know it’s going to be tough to get into the feature but Trey will be giving me a good car. It’s all up to the driver.”
To do well, Christopher, who is used to racing primarily in his native New England region, will have to outrun a solid contingent of greater Lehigh Valley, PA racers.
Kyle Lick of Lehighton, PA returns to the PPL Center driving a car owned by his father. Tyler Lindsay, Micro Sprint dirt track specialist at Shellhammers Speedway, riding out of Slatington, PA, will compete driving a family owned car.
Earl Paules of Lehighton. PA, a perennial favorite, is entered in a car sponsored in part by E. Schneider & Sons Scrap of Allentown, PA. Mike Bednar of Lehighton, PA, will be driving Mike Murray’s highly touted No. 12 TQ Midget.
In addition, western New York teams, Hoddick’s neighbors, are also planning to fight for victory in the PPL Center Series opener.
Ryan Susice, Ramsomville, NY,, Tyler Thompson, Oswego, NY, Jonathan Reid of Lockport, NY and Ryan Bartlett of Watertown, NY, have all filed race entries.
Christopher will also be up against one other New Englander. Derek Robbie of Bellingham, MA has entered in a car owned by Nick Giordano.
The biggest Indoor Auto Racing Series PPL Center TQ Midget race winner is Ryan Flores of Mooresville, N.C. Flores, who works for Roger Penske’s NASCAR Cup organization, will be seeking his fifth victory in January, with his eyes set on becoming the winningest TQ driver in series history. Christopher is a close friend of Flores.
The Allentown schedule calls for doors opening at 6:00 PM with racing getting underway at 7:30 PM on Friday. On Saturday, doors open and Fan Fest begins at 5 PM with racing starting at 7:00 PM sharp.
The on-track Fan Fest is available at no extra charge to ticket holders who chose the option when making their purchase. This allows access to the speedway where the cars competing will be on display for photos and drivers available for free autographs.
After Allentown, the series will head to Atlantic City’s Boardwalk Hall on January 28 & 29 for the NAPA KNOW Gambler’s Classic and conclude in Syracuse, NY at the NY State Fairgrounds Exposition Center on Friday and Saturday, March 11 & 12.
Additional entries are currently being accepted by the Indoor Auto Racing Series for its trio of 2022 races.
“We expect that competitor interest in the TQ Midget, Champ Kart, and Slingshot classes will be at an all-time high since we haven’t raced at all in over a year,” Series organizer Len Sammons noted.
TQ Midget race cars will headline all the programs with high-speed excitement competing on speedways set up on the concrete floors of three arenas. Slingshots and Champ Karts will complete the tripleheader programs.
Series information including links for purchasing tickets, hotel rooms and racer entry forms are available on the series website: www.indoorautoracing.com.
Sponsorship opportunities remain for all Indoor Auto Racing Series races.
For more information, contact Danny Sammons at danny@aarn.com or call 609-888-3618.
Corporate sponsorship packages are available to fit every budget.