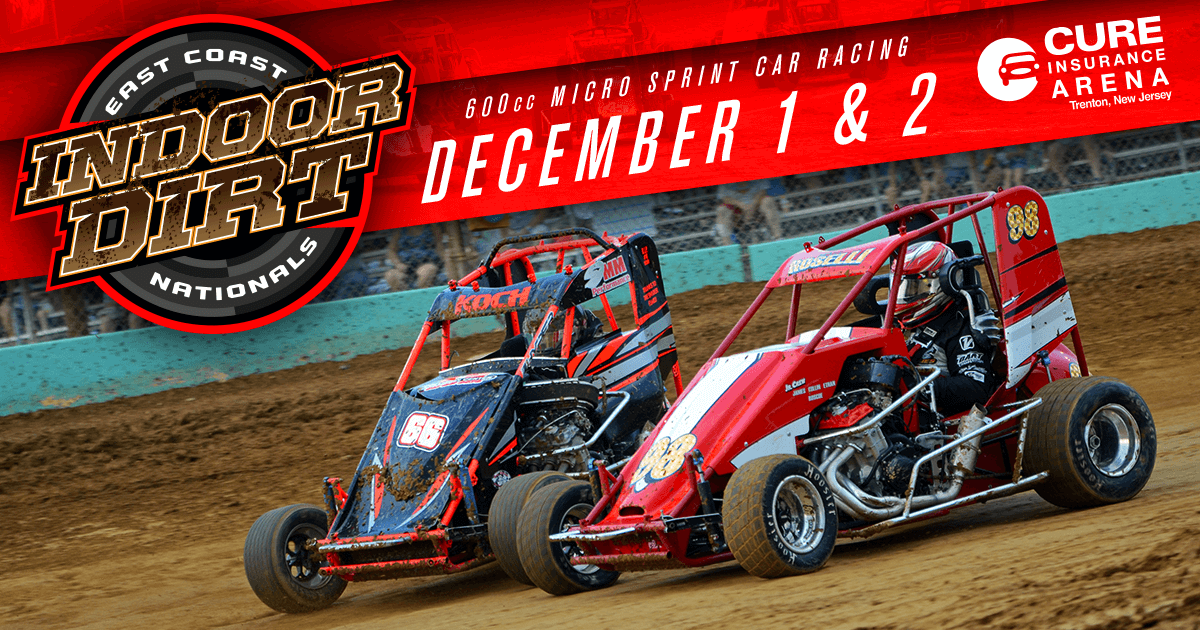 TRENTON, NJ October 9, 2017 . . . The Indoor Auto Racing Series will return to Trenton, N.J. this year for the fifth straight year. While the building hasn’t changed, its name has as well as the racing surface the race cars will be competing on.

Wingless 600cc Micro Sprints will be headlining this year’s two-day program racing on a clay surface on Friday and Saturday, December 1st and 2nd.

It was announced this week that the Sun National Bank had lost the naming rights of the Center to Cure Auto Insurance. Thanks to a new multi-year agreement Mercer County’s 10,000 seat center will immediately be renamed the CURE Insurance Arena. Terms of the deal were not announced.

The arrangement includes exterior and interior signage and brand recognition in all advertising for the facility. The arena’s website domain changed immediately to reflect the arena’s new name (www.cureinsurancearena.com).

“CURE’s positive brand association resonates strongly throughout our community and will be helpful in generating excitement around the arena and our events,” said Spectra’s Fran Rodowicz, General Manager, CURE Insurance Arena. “We are fortunate to collaborate with CURE and their valuable marketing prowess to help us cross-promote the arena.”

Fans wishing to purchase tickets online will now need to go to the new website, www.cureinsurancearena.com. Tickets can also be purchased by calling 1-800-298-4200.

Complete information on the event, including racer entry forms, remains available from the indoorautoracing.com. Links to tickets and local hotels are also available at this location.

The race, a first of its kind in New Jersey is being produced by Len Sammons Motorsports Productions as one of four Indoor Auto Racing Series Fueled By VP Racing Fuels events. It will be the only event of the series held on clay surface and it will not count towards the overall series point championship.

The schedule of events calls for heat races awarding passing points and four A-qualifier feature races on Friday night. On Saturday ‘Alphabet mains’ will determine the starting lineups with racers having the opportunity to advance from F, E, D, C, and B to the 40 lap A-Main.

Saturday’s A-Main will pay its winner $5,000 to win (for enrollees in the Gamblers program). Fifth place pays $1,000. Twenty four starters will take the green flag in the A-Main with $200 offered up to start the event.

Contingency award sponsors to enhance driver payouts and a title sponsor for the event are being sought. Sponsorships are available for all events. For information, e-mail Danny Sammons at danny@aarn.com.

The two days of racing consist of a complete program of racing for Three Quarter (TQ) Midgets both nights. Slingshots and Champ Karts will also be in competition.

The race meet will be a two-day event, with the dates moved away from the holiday weekend as was the case in 2017. Tickets for premium seats are expected to go quickly. Early ticket purchase is advised.

The two days of racing are highlighted by the running of the 16th annual TQ Midget Gambler’s Classic Saturday night.

The finale of the crowded, energized 2017-2018 slate is the first Indoor Auto Racing event in New York State, on February 9-10, 2018 in the Times Union Center in downtown Albany, N.Y.

Race fans in New York State will experience the thrill of high-speed auto racing in the dead of winter for the First Annual Albany Indoor Race a brand new event for New York State.

The Albany race is the finale of the Len Sammons Motorsports Productions Indoor Auto Racing season and will be the scene of the crowning of the 2017-2018 Series champion.

Sponsorships are available for all events. For information, e-mail Danny Sammons at danny@aarn.com.