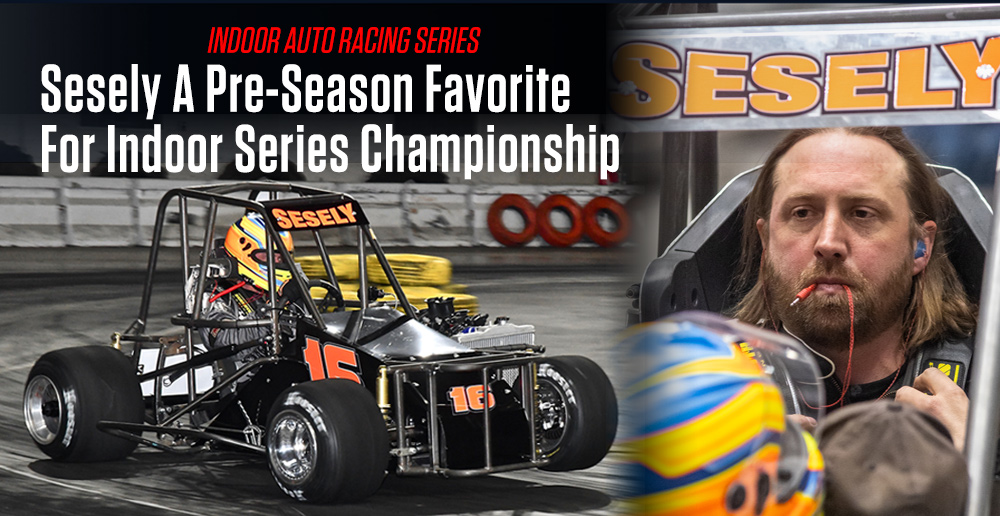 Allentown, PA – Anthony Sesely of Matawan, N.J. is among the pre-season favorite to win the upcoming Indoor Auto Racing Series Fueled By VP Racing Fuels races and claim the championship for a third time.

After nearly winning all three 2022 TQ Midget indoor events last year, in three different cars, Sesely will be one of upwards of forty drivers seeking victory when the season kicks off with the Ironton Global Indoor Race in Allentown, PA’s PPL Center on Friday and Saturday, January 6-7, 2023.

Tickets are on sale online at www.pplcenter.com and the day of the event at the PPL Box Office for the Allentown events presented by BELFOR Property Restoration.

In last year’s opener in Allentown, Sesely drove his own No. 16 to the lead with an outside surge on a restart. On a later restart, he mistakenly chose the bottom on a double-file restart and got shuffled back and finished a disappointing sixth.

Then in a newly designed TQ Midget by PK Racing, Sesely appeared to be heading for his fourth Atlantic City Gambler’s Classic win until the machine overheated.

Another new and improved PK Racing TQ Midget was built to make the tall driver more comfortable for the Syracuse, N.Y. season finale and he put on a dominating performance that thrilled the crowd.

After driving to the front during Saturday’s 40 lap A-Main, he was forced to pit to repair a leaking fuel line on lap 13. Showing real speed, he marched back through the field using mainly the outside groove in exciting fashion to take the victory and third in the final point standings.

In Allentown on Friday night, the TQ Midgets will compete in three A-Qualifier main events. The top three in each event locks into the Saturday’s main event and the Dash. The winner of each of these races will now receive $1,000 thanks to Ironton Auto Body and the Dash winner another $500!

Saturday’s events, sponsored by Future Homes, finds all but the top three finishers in Friday’s Qualifiers lining up in heats and consolation races that fill out the starting field for the 40-lap finale.

The Slingshots and Champ Karts will be action in Allentown running two complete shows with feature events both nights.

After Allentown the series then moves to Atlantic City for the 20th year under Len Sammons Productions. The NAPA KNOW HOW weekend will feature a first ever “Double Down” schedule, with two Gambler’s Classic races for the TQ Midgets being held, one on Friday night and another on Saturday night.

The TQ Midgets will be joined by the Dirt 600 Micro Sprints, Slingshots and Champ Karts running a single feature.