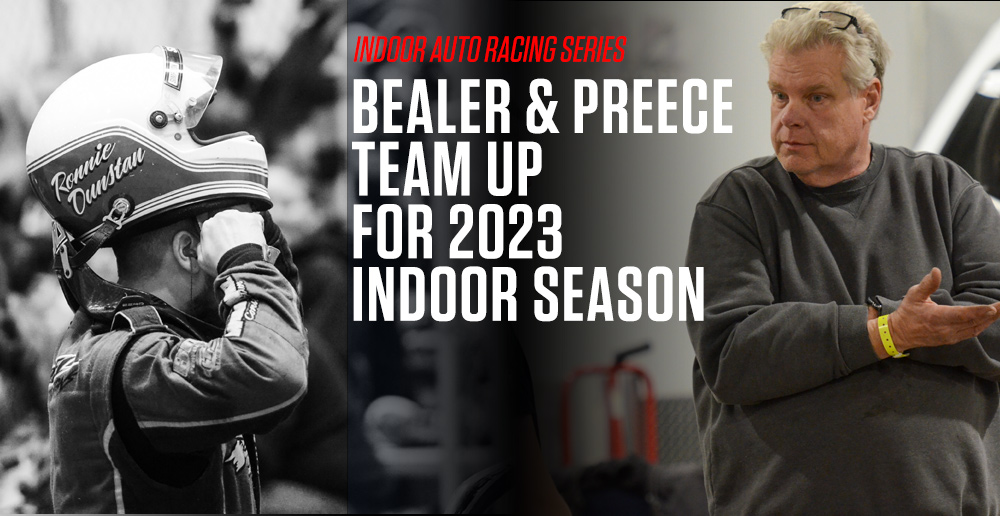 Davey Sammons2022-11-26T03:41:57-05:00
By Davey Sammons Allentown Indoor Race, Atlantic CIty Indoor Race, News 0 Comments
Trenton, NJ – A new team formed out of adversity in the 2022 Indoor Auto Racing Series finale will be returning for Series events. Zach Bealer will be driving Donny Preece’s No. 44 in the Allentown and Atlantic City Indoor Auto Racing Series events.
Many songs and movies have coined the phrase, “you never know” and for Zach Bealer and new car owner Donny Preece that sentiment rings true as ever. A series of unfortunate and unusual events led the pair to form a last second partnership at last March’s Syracuse Indoor Race before the TQ Midget A-Main.
Bealer had qualified his own car for the Syracuse 2022 finale but discovered a crack in the frame, after the B-Main and just before the main event. With the driver qualified for the race, Bealer set out to find a car that he could drive! Donny Preece’s car had not qualified for the feature and thus was available; Bealer and Preece struck a deal and Bealer drove the car from the back to inside the top ten prior to a mechanical failure.
Both driver and car owner were impressed with one another’s efforts that they have now teamed up for the Allentown and Syracuse Indoor Auto Racing Series events. Bealer will now head to the PPL Center in Allentown, PA on January 6 and 7, with a chance to bring the Preece team back to victory lane.
The car and team Bealer will be driving enjoyed immense success on the Indoor Series with legendary driver Ted Christopher at the wheel, scoring five victories and back to back titles in 2010 and 2011. After Christopher’s death, the TQ Midget Championship trophy was named in his honor, the TC Cup is presented to the top points earner each year.
After Allentown the series heads to Boardwalk Hall in Atlantic City, NJ on January 28 and 29 for the NAPA KNOW HOW sponsored weekend. Here the team will have two chances to capture the elusive Gambler’s Cup trophy, as the event will feature a first ever “Double Down” schedule, with two main events and two Gambler’s Classic Cup trophies being handed out for the TQ Midgets, one on Friday night and another on Saturday night.
Tickets, entry forms, host hotels and more information on the Allentown and Atlantic City Indoor Race weekends and the return of the East Coast Indoor Dirt Nationals at the Cure Insurance Arena in Trenton, NJ are available online at www.indoorracing.com.