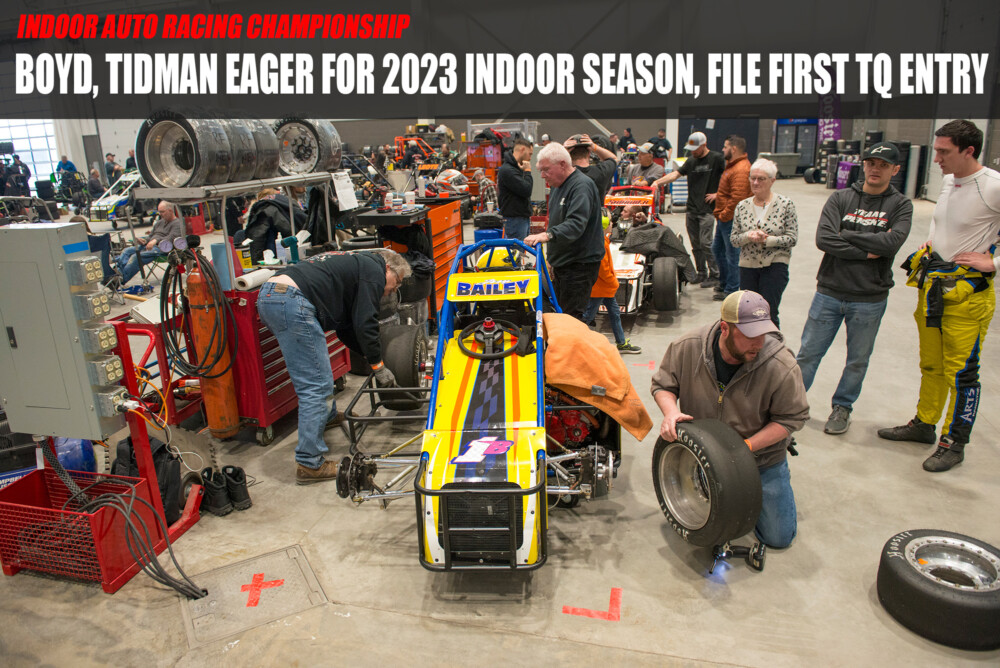 Davey Sammons2022-11-22T21:19:36-05:00
By Davey Sammons Allentown Indoor Race, Atlantic CIty Indoor Race, News 0 Comments
Trenton, NJ – As a driver, Lenny Boyd of Howell, NJ won four Indoor auto races in his career, two of them inside Atlantic City’s Boardwalk Hall and two of them at Niagara Falls, NY
Decades later as a car owner with wife Donna, the Boyds have filed  the first official entries for the 2023 Indoor Auto Racing Series Fueled By VP Race Fuels with  driver Joey Bailey of Monroe Township NJ driving their familiar bright yellow No. 1B.
Together, Bailey, in the Boyd car have been a formidable team, though to date, they lack one thing: an A-Main feature victory.
Boyd reflected back on the 2022 Indoor season.
“No doubt it  was our best year ever indoors. Finished fourth in Series points, Had some good finishes, good time trial results, and not a scratch on the car after a three race Indoor Series. Very happy with that.
“You like to win, but I think we made a marked improvement in performance,” Bailey said.
The Indoor Auto Racing series will kick off its 2023 campaign in Allentown, PA at the PPL Center on January 6 and 7 with the 7th running of the Ironton Global sponsored events. The TQ Midgets will again headline that event along with the Slingshots and Champ Karts which will run double features at that event.
The Boyd TQ with Joey Bailey is also entered in the NAPA KNOW HOW Atlantic City Gambler’s Classic, the signature event of the Indoor Auto Racing Series.
The January 28-29 NAPA KNOW HOW sponsored weekend  will feature a first ever “Double Down” schedule, with two main events and two Gambler’s Classic Cup trophies being handed out for the TQ Midgets, one on Friday night and another on Saturday night.
Adding another flair to the weekend and bonus for attendees, will be herald the return of  Dirt 600 Micro Sprint racing inside the historic Boardwalk Hall Atlantic City venue for the first time in a decade.
“The 2023 race weekend will be our 20th hosting the event in Atlantic City and we are going all in to make it the best weekend yet,” stated series promoter Len Sammons.
“The Dirt Micro Sprint division gives us a different look and hopefully brings in a different group of drivers to experience the fun in Atlantic City.”
Wingless Dirt 600 Micro Sprints will qualify Friday for their feature Saturday. There is also a scheduled Thursday night practice for all divisions.
New, restricted rules are in place to limit competition to 600cc Micro Sprints that run on dirt and eliminate specialty built cars for indoor racing competition on concrete.   Team entering this division will be required to run Hoosier dirt treaded tires, either a RD20 or the U6SA/ASCS spec compound only.
Tickets for the recently announced return of the East Coast Indoor Dirt Nationals for the wingless 600 Micro Sprints at the Cure Insurance Arena in Trenton, NJ will go on sale Wednesday, October 26.