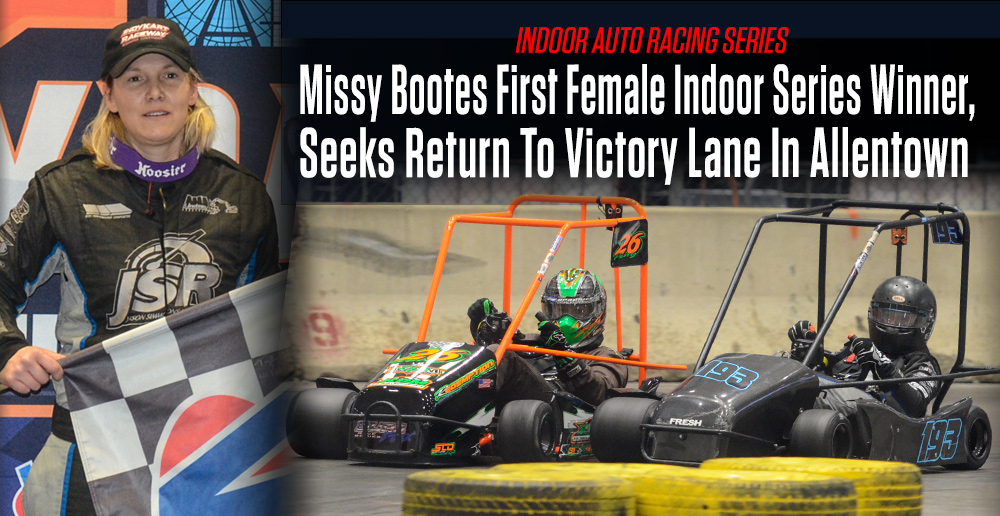 Allentown, PA –  Ten months after becoming the first ever Indoor Auto Racing Series female winner, Missy Bootes is coming to Allentown’s PPL Center hoping to win again. The lady racer from Carlisle, PA will have two chances to do so during the 7th running of the Ironton Global Allentown Indoor Races on January 6 and 7 at the PPL Center.

Bootes will be behind the wheel of Champ Kart No. 193, as she was last year, for the 2022 Indoor Series. The Champ Karts and Slingshots will be running to complete shows in Allentown this season with qualifying and a 20 lap feature being held both on Friday and Saturday night.
The headline TQ Midgets will be in action both nights in Allentown in BELFOR Property Restoration events. On Friday night they’ll time trial then be split into three A-Main Qualifiers each paying $1,000 to win thanks to Ironton Auto Body.

Bootes won a dramatic Champ Kart victory in the season finale inside the New York State Fairgrounds Expo Center in Syracuse, N.Y.  in March. In the process, Bootes became the first female driver in the 19-year history of the Series to win a main event.

In that event she came racing in the third position going down the backstretch of the final lap to winning the a extremely popular 20-lapper. Post-race, Bootes knew her victory had unusual significance, telling the cheering crowd, “it’s popular for the fans seeing a female win for the first time.

Hopefully, it will be encouraging for some of the young girls who are racing Karts that ‘we can do it to’”.
Bootes Syracuse win, while surprising, was in no way an upset. She had run third in the Allentown series opener last January and was in contention in Atlantic City in the second event of the 2022 series before dropping out with mechanical issues.

She is also a veteran kart racer, having competed for nearly 30 years at various tracks, notably Hunterstown and Selinsgrove in Pennsylvania. Her husband also races Karts, but was not in the Indoor Auto Racing Series events this past year.

The Syracuse win was fashioned after Dan Marsden and Mike Perry, running in front of her, got together racing for the lead. She jumped at the oppurtunity and passed them both to take the thrilling win.

After Allentown the series then moves to Atlantic City for the 20th year under Len Sammons Productions. The NAPA KNOW HOW weekend will feature a first ever “Double Down” schedule, with two Gambler’s Classic races for the TQ Midgets being held, one on Friday night and another on Saturday night.

The TQ Midgets will be joined by the Dirt 600 Micro Sprints, Slingshots and Champ Karts running a single feature.