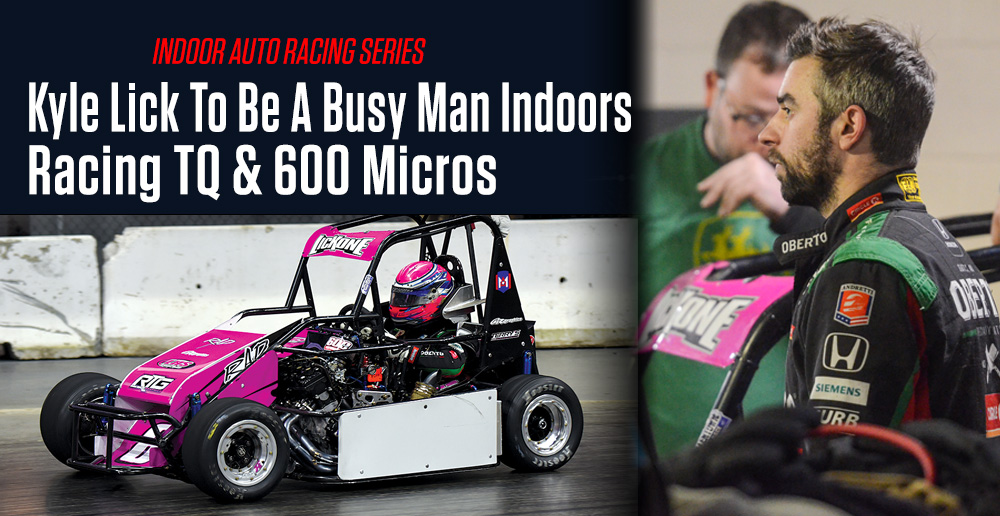 Trenton, NJ  –  Kyle Lick of Lehighton, PA  is destined to be one the busiest men of all in the upcoming 2023 Indoor Auto Racing Series Fueled By VP Racing Fuels.   Lick has filed entries for the Ironton Global Indoor TQ races in Allentown, PA on January 6-7, 2023, two entries for the three NAPA KNOW HOW Atlantic City Gambler’s Classic features over January 28-29, 2023 weekend, and an entry for the East Coast Indoor Dirt Nationals Friday and Saturday, February 24-25, 2023 inside the Cure Insurance Arena in Trenton, NJ.Long admired for his heroics on concrete with a customized 600 Dirt Micro, Lick has joined the Lafler chassis brigade for the first time, purchasing one of the long-dominant makes of car for the Allentown and Atlantic City TQ events. “We came a long way with the Micro from when we first got it which I think was five or six years ago, if not more. It was always decent, and the last couple of years, it has been a lot better,” offered Lick.“We put down good times, but keeping up with the extra power of the Lafler cars, even with the 50 pound weight break the 600s are allowed, is tough as the laps move forward in the features,” Lick explained.The venerable Micro that the Lafler car is replacing, will still be in action in Atlantic City with Lick fielding the car for the added 600 Micro races scheduled for Saturday.“The last time they ran a Dirt Micro race in Atlantic City I won the Friday portion of it.  Ran second Saturday until I got into a lapped car. You run these cars pretty much out of shape, which fits my driving style,” Lick shared.Lick will wrap up his full Indoor Auto Racing Series with a start in the East Coast Indoor Dirt Nationals.“I’m going to run my father’s car in that race. I run the car during the summer from time to time,” Lick related.The Indoor Auto Racing series will kick off its 2023 campaign in Allentown, PA at the PPL Center on January 6 and 7 with the 7th running of the Ironton Global sponsored events. The TQ Midgets will again headline that event along with the Slingshots and Champ Karts which will run double features at that event.The January 27-28 NAPA KNOW HOW sponsored weekend  will feature a first ever “Double Down” schedule, with two main events and two Gambler’s Classic Cup trophies being handed out for the TQ Midgets, one on Friday night and another on Saturday night.“This year is the 20th running of the Atlantic City Indoor Races and we want to do everthing possible to make it the best one yet,” stated series promoter Len Sammons.   “With a main event on Friday night for the TQ Midgets, we hope everyone will come down and make a weekend out of it and enjoy everything Atlantic City has to offer!”The Dirt 600cc Micro Sprints, Slingshots and Champ Karts round out the card in Atlantic City.On Friday night, in addition to the complete Gambler’s Classic for the TQ Midgets, the Dirt Micros, Slingshots and Champ Karts will also compete in qualifying races. Thursday night will be offer a closed to the public practice session for all divisions. Racers looking to compete in any of the divisions this winter are encouraged to file entry forms and review division rules, available for download on the series website.For more information including ticket information, host hotel rates and sponsorship options visit the series website www.indoorautoracing.com.