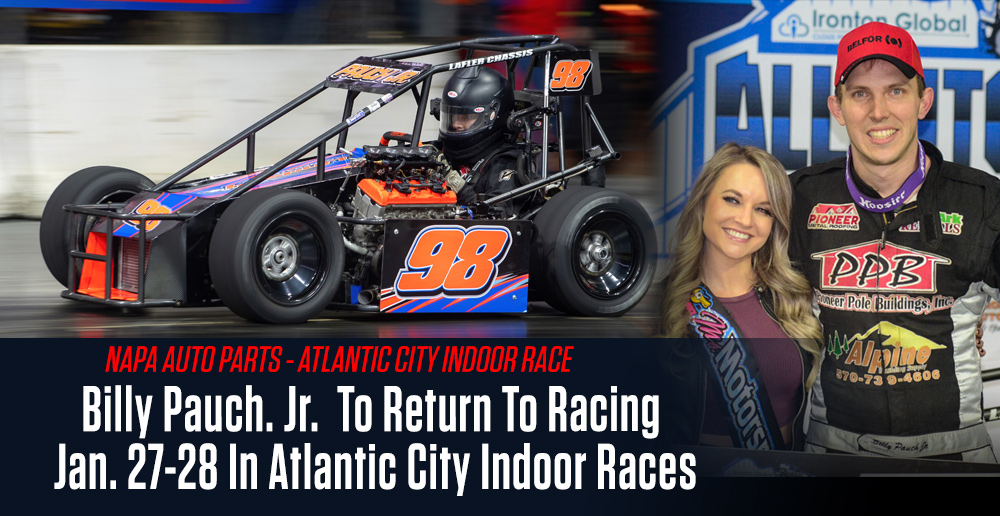 Davey Sammons2023-01-13T19:36:05-05:00
By Davey Sammons Atlantic CIty Indoor Race, News 0 Comments
Atlantic City, NJ – Third generation racer Billy Pauch, Jr. will make his first start since a bone jarring dirt Modified Stock car crash at Del.’s Georgetown Speedway last October 29th injured his back.
Pauch, of Frenchtown. NJ,  will be back in the seat of a TQ Midget owned by Fulton, NY’s Jason Simmons Racing (JSR), the same team in which he showed flashes of brilliance in 2022.  Pauch will compete in the Atlantic City Indoor Race on January 27 and 28.
“I wouldn’t miss it for the world,” said Pauch, after being released by the doctors to compete at the event.
Pauch had planned to start his season at the Indoor Auto Racing Series opener at the PPL Center in Allentown, PA, but through the suggestion of his doctors had to withdraw. At that event Tyler Thompson, who will be Pauch’s JSR teammate in Atlantic City, nearly won the race showing the quality of the race team.
Thompson won his Friday night Triple 20 and the Dash to earn the pole for the 40 lap feature there on Saturday night. Thompson then impressively led the first 15 laps before finishing an impressive fourth.
Pauch has made three previous attempts to qualify for an Atlantic City Indoor TQ A-Main but has been thus far unsuccessful. But in his only start with JSR Racing in Allentown in 2022, he won a Friday night Triple 20 Qualifier and finished ninth in the feature after being spun late in the race.
The Georgetown crash caused a pre-mature end to what had been a good 2022 season. Pauch won 12 times and finished second in the points at N.J.’s Bridgeport Motorsports Park.
When the Indoor Auto Racing Series season is complete in Atlantic City, Pauch will be resuming his outdoor Dirt Modified season, racing his own Modified No. 15 and the Rick Holsten No. 96 at area tracks.
All told, Billy Pauch, Jr. has amassed 123 career feature event wins in his career achieved at 13 different speedways.  He has won ten track championships at four different tracks, the most recent being the 2020 Georgetown Speedway Modified track crown.
The third-generation driver would love to join his legendary father, Billy Pauch Jr., as both an Indoor Series and Atlantic City race winner and he’ll have two shots to do so.
This year’s Atlantic City event will provide thousands of spectators with two complete TQ Midget programs – a “Double Down” schedule – one on Friday, January 27th and a second on Saturday the 28th.
To make up for a Covid-19 cancellation in 2021, two complete Gambler’s Classics will be run. That will include two sets of time trials, heats,  and ‘alphabet main events’ that will select two different starting fields for the 40 lap A Main each night.
The BELFOR Property Restoration TQ Midgets opened the Indoor Auto Racing Championship Series fueled by VP Racing Fuels, inside Allentown, PA’s PPL Center on Saturday, January 7th. In one of the most exciting events in series history, Matawan, N.J. driver Anthony Sesely rim-road around the speedway to a win over Ryan Flores.
Sesely, a three-time Gambler’s Classic winner, enters this year’s event as a the pre-race favorite. Flores, formerly from N.J. before moving south to work full-time for Roger Penske’s NASCAR Cup team, will be seeking his second victory inside historic Boardwalk Hall.
Tim Buckwalter is the defending champion of the Gambler’s Classic. Buckwalter, Pauch, and an anticipated 50 other TQ Midget teams will be racing in back-to-back Gambler’s Classics, on Friday and Saturday, each offering a $5,000 first place prize for those drivers who opt to pay the ‘Gambler’s Fee’ in advance of the race.
Prior to Saturday’s event Fan Fest will be held on the racing surface for those with lower level reserved tickets from 5 to 6:15.  Drivers from the event as well as  NHRA Funny Car champion Ron Capps will be signing autographs.
Joining the headline TQ Midgets will be the Slingshots, sponsored by Pa.’s Kutztown Action Track, the Hoosier Tire Champ Karts and the 600cc Dirt Micro Sprints. They’ll run qualifying events on Friday and their features on Saturday night.
The Atlantic City races will be run for the 20th year under Len Sammons Productions and past winners will be celebrated. The first event held on January 18, 2003 was won by Andy Mackereth of Mississauga, ONT. Fellow Canadian Stewart Friesen was second and Watertown, N.Y.’s Tim McCreadie was third.
Good seats for both night remain available at Ticketmaster, a direct link is available from the series web-site, indoorautoracing.com, or daily at the Boardwalk Hall Box Office where the price is increased by $5 the day of the event.
For those who cannot attend, the event will be available on DTD Pay-Per-View for $64.99 for the weekend or $34.99 for Friday and $39.99 for Saturday.