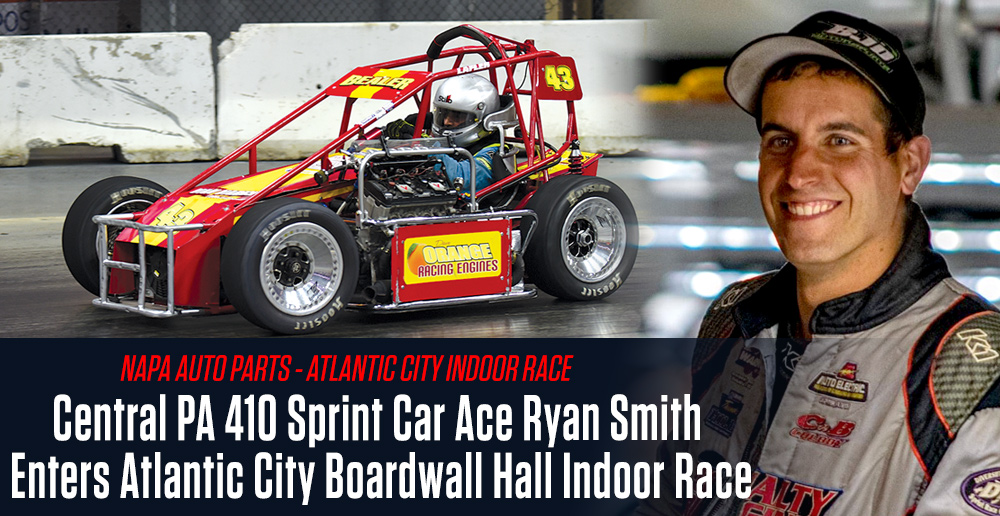 Smith will be behind the wheel of the No. 43 TQ Midget owned by George VanVarick for the first time at Boardwalk Hall on Friday and Saturday, January 27-28. Pat Bealer had driven the No. 43 in previous Indoor Auto Racing Series Fueled By VP Race Fuels starts in 2022.

‘The Kunkletown Kid’ has an interesting performance record in past Atlantic City race weekends. In 2006 and 2007, he won the Slingshot A-Main, both times driving cars owned by his father Randy.

Moving to the TQ Midget side for the first time in 2008, Smith failed to qualify. Lessons learned from that first start gave way to a fifth place TQ feature finish in 2009, and a fourth place ride in 2010. In 2012, Smith authored a  well driven second place effort finishing second to Erick Rudolph. Smith’s last TQ Midget Atlantic City start was in 2013; he finished 13th.

This year’s NAPA Auto Parts Atlantic City Indoor Race will provide thousands of spectators with two complete TQ Midget programs – a “Double Down” schedule – one on Friday, January 27th and a second on Saturday the 28th.

To make up for a Covid-19 cancellation in 2021, two complete Gambler’s Classics will be run. That will include two sets of time trials, heats,  and ‘alphabet main events’ that will select two different starting fields for the 40 lap A Main each night.

The Atlantic City races will be run for the 20th year under Len Sammons Productions and past winners will be celebrated. The first event held on January 18, 2003 was won by Andy Mackereth of Mississauga, ONT. Fellow Canadian Stewart Friesen was second and Watertown, N.Y.’s Tim McCreadie was third.

Sesely, a three-time Gambler’s Classic winner, enters this year’s event as a the pre-race favorite. Flores, formerly from N.J. before moving south to work full-time for Roger Penske’s NASCAR Cup team, will be seeking his second victory inside historic Boardwalk Hall.

Prior to Saturday’s event Fan Fest will be held on the racing surface for those with lower level reserved tickets from 5 to 6:15.  Drivers from the event as well as  NHRA Funny Car champion Ron Capps will be signing autographs.