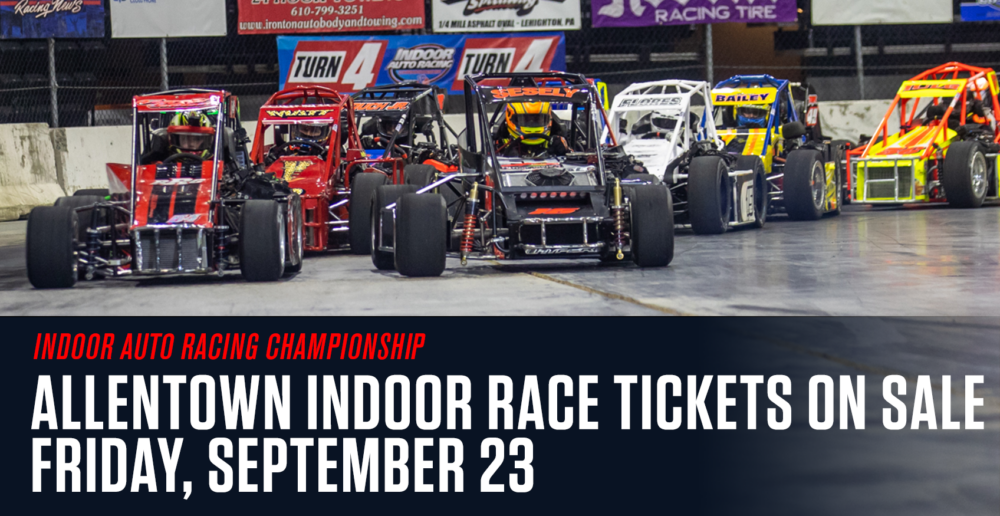 Indoor PR2022-09-22T13:54:27+00:00
By Indoor PR News 0 Comments
Indoor Racing Returns To Allentown, PA’s PPL Center January 6 and 7
Allentown, PA  –  The Indoor Auto Racing Series will kick off its 2023 season at the PPL Center in downtown Allentown, PA on Friday and Saturday January 6 and 7.
The 7th running of the Allentown Indoor Races will once again be presented to Ironton Global and feature three divisions of racing TQ Midgets, Slingshots and Champ Karts.
The headline TQ Midgets will run a similar schedule as in the past headed by Triple 20 qualifiers on Friday night and a 40 lap feature on Saturday.
“Friday night’s Triple 20s for the TQ Midgets are a great way to kick off the season and allows not one, but three drivers to walk out of the PPL Center as Friday night winners” stated series promoter Len Sammons.
The Champ Karts and Slingshots, however, will run complete shows on both Friday and Saturday to give them three races towards there prestigious Indoor Series championship which will be decided on Saturday night in Atlantic City.
“Feature events both nights is a nice reward for our Slingshot and Champ Kart competitors and makes it three complete shows to determine the series champion” stated Sammons.
After the Allentown events, the race for the 2023 Indoor Series championship will head to Atlantic City for the 20th running of the NAPA KNOW HOW Atlantic City Indoor Races.   In a special twist for the 20th running, the TQ Midgets will compete in double Gambler’s Classic, with main events on Friday and Saturday night.
Additional sponsorship support for the events is provided by BELFOR Property Restoration, Future Homes and Ironton Auto Body.
Tickets for both events will go on sale to the public on Friday, September 23.
Allentown Indoor Race tickets will be available online PPLCenter.com or at the Box Office.
For more information including special host hotel rates visit the series website www.indoorracing.com.