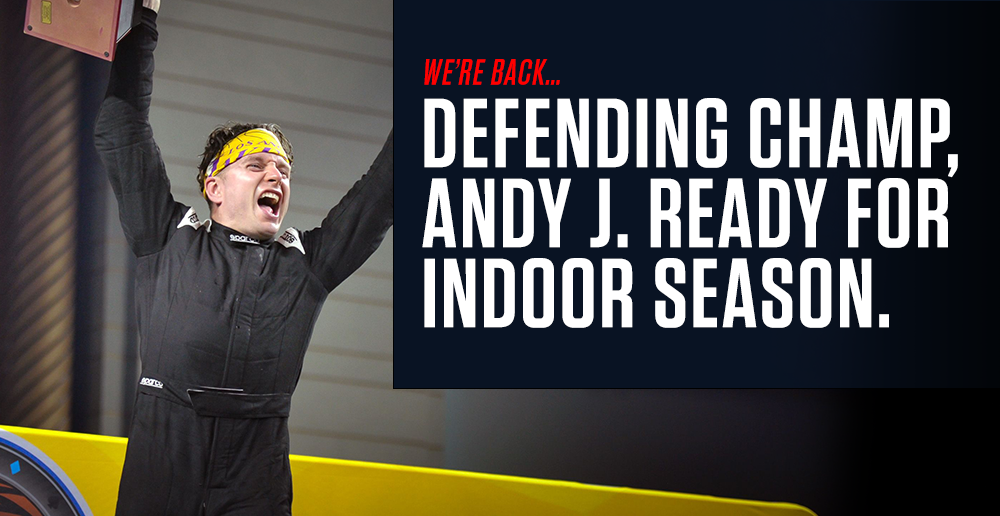 Defending Champ To Return In Refined Version Of His ‘20 Title Winning No. 57 – Andy Jankowiak Eager For Indoor Auto Racing Series To Resume Jan. 7-8 In Allentown PA

Allentown, PA – The long-anticipated resumption of the Indoor Auto Racing Series cannot come soon enough for defending Series champion Andy Jankowiak. The first race weekend is set for Friday and Saturday, January 7-8, 2022.
The races inside Allentown, PA’s PPL Center sponsored by Ironton Global will be the first since Covid-19 forced the stoppage of the 2020 season finale at the New York State Fairgrounds in Syracuse, NY.
Jankowiak will be returning to the Indoor Auto Racing Series with the same No. 57 with which he has been so successful, a car he has had over a year to fine-tune. He savors the opportunity to get racing again.
“I love the pace, the atmosphere of indoor racing, love the competition. What I really love about it is the ability to think your way through things with the car,” he described.
The last time Jankowiak drove his No. 57 Midget, it was across the finish line first in the 2020 Gambler’s Classic in Atlantic City’s Boardwalk Hall. That win, as it happened, was the difference that allowed Jankowiak to win the 2020 Indoor Auto Racing Series championship after the Syracuse race was later canceled.
“After we won the last race in Atlantic City, I did make some changes to the car, with the rear end geometry but have never had the chance to try it. The tweaks were pretty minor actually. But you know, if you are standing still with what you race, you’re going to get passed,” he shared.
“You have to think about what you need to do to go faster. Being in ARCA now, I have met a lot of new people, have had access to new opinions, access to new ideas.”
Jankowiak made his ARCA Stock Car series debut in Daytona, FL last February. In seven starts with ARCA in 2021, his best finish was a seventh at both Pocono, PA, and Talladega, AL.
“There are things that translate among all race cars. The basic principles are the same. Maintenance, fatigue, things like that. With the ARCA car, the issue is longevity. Durability can be applied across all forms of racing. We go 40 laps and have to take a little crashing and banging,” said Jankowiak.
The Tonawanda, N.Y. driver admitted that not racing indoors last year was difficult for him.
“It was tough I really look forward to the indoor stuff. The joke around here a couple of years ago was that if Daytona ARCA testing was the same weekend as Atlantic City, it was going to be a real shame to have to miss Daytona.”
Jankowiak won the 2020 Indoor Auto Racing Series TQ Midget Car champion by a slim margin over Erick Rudolph.
To be crowned champion in 2022, Jankowiak will need to best a strong field of contenders including two drivers who visited victory lane during the recent Turkey Derby at Wall Stadium. Local favorite Briggs Danner, a Lehigh Valley, PA native drove a TQ Midget to victory, outdoors in a tune-up for indoor racing in a car owned by fellow racer Matt Janisch of Nazareth, PA.
The biggest Indoor Auto Racing Series PPL Center TQ Midget race winner is Ryan Flores of Mooresville, N.C. Like Danner, Flores won a race at last weekend’s Turkey Derby, his coming in a 100-lap Factory Stock race. Flores, who works for Roger Penske’s NASCAR Cup organization, will be seeking his fifth victory at the PPL Center in January, with his eyes set on becoming the winningest TQ driver in series history.
BELFOR Property Restoration Services, provider of professional 24/7 residential and commercial restoration services has signed on to be a presenting sponsor of all three Indoor Series races in 2022.
Ironton Global, the leading international provider of cloud-based communication services, headquartered in Coplay, PA, is the title sponsor for the Allentown event.
Future Homes of Kunkletown, PA, a home construction company, specializing in residential, multi-family, and energy-efficient buildings, has also returned as the presenting sponsor for the Saturday night card of racing.
After Allentown, the series will head to Atlantic City’s Boardwalk Hall on January 28 & 29 and conclude in Syracuse, NY at the NY State Fairgrounds Exposition Center on Friday and Saturday, March 11 & 12.
Tickets for the two days of racing in Allentown are on sale now. To order online visit www.pplcenter.com. Tickets may also be purchased in person at the arena box office, open only during events hosted at the arena including Lehigh Valley Phantoms games
Additional entries are currently being accepted by the Indoor Auto Racing Series for its trio of 2022 races.
“We expect that competitor interest in the TQ Midget, Champ Kart, and Slingshot classes will be at an all-time high since we haven’t raced at all in over a year,” Series organizer Len Sammons noted.
TQ Midget race cars will headline all the programs with high-speed excitement competing on speedways set up on the concrete floors of three arenas. Slingshots and Champ Karts will complete the tripleheader programs.
The Allentown schedule calls for doors opening at 6:00 PM with racing getting underway at 7:30 PM on Friday. On Saturday, doors open and Fan Fest begins at 5 PM with racing starting at 7:00 PM sharp.
The on-track Fan Fest is available at no extra charge to ticket holders who chose the option when making their purchase. This allows access to the speedway where the cars competing will be on display for photos and drivers available for free autographs.
Series information including links for purchasing tickets, hotel rooms, and racer entry forms are available on the series website: www.indoorautoracing.com.
Sponsorship opportunities remain for all Indoor Auto Racing Series races.
For more information, contact Danny Sammons at danny@aarn.com or call 609-888-3618.
Corporate sponsorship packages are available to fit every budget.