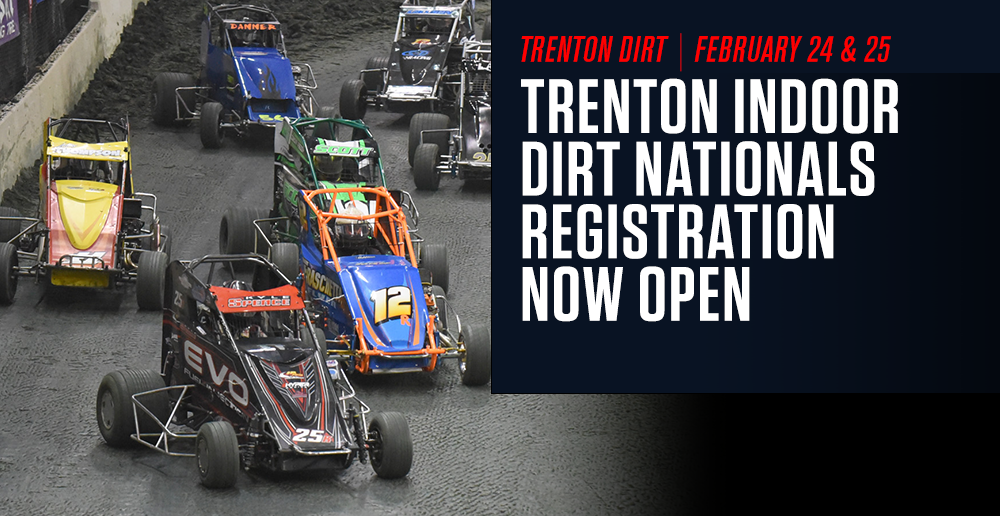 Trenton, NJ – After a two-year hiatus, the East Coast Indoor Dirt Nationals will be returning to the CURE Insurance Arena in Trenton, NJ on Friday and Saturday February 24-25, 2023.

Entry forms for prospective Wingless 600 Micro Sprints racers and rules for the event have been posted on the series website www.indoorautoracing.com. A maximum of 100 entries will be accepted due to space limitations. Aidan Borden, Cody West, and Tyler Ulrich were the first entries received after just one day.

Tickets for the event, which will feature Wingless 600 Micro Sprints, go on sale Tuesday, November 1. Tickets will be available at the CURE Insurance Arena Box office, online at www.indoorautoracing.com and through Ticketmaster. A special pre-sale for tickets will be held starting October 28.

At the last running, in 2020, Jon Keller left fans speechless and wanting more as he ran through the “alphabet soup” of preliminary races, advancing from the E-Main to the A-Main. The Salem, N.J. division regular then started dead last in the 40 lap A-Main and captured the victory with an exciting last lap pass.

“Each year we held the event, the racing has gotten better and better, culminating with the best race ever in 2020. We had all the momentum heading into 2021 and then the world shut down,” stated promoter Len Sammons.

“Bringing the event back has been my top priority and I am excited to see it return in 2023.”

Friday night will feature heat races and A-Main Qualifiers for all entries, with passing points earned for each race and position gained.

On Saturday night, the top performers from Friday will be locked into the A-Main with the remaining competitors slotted into mains E through B with a chance to advance and lock themselves into the main event.

Teams will arrive in Trenton on Thursday for closed door practice on the track which again be built with the same rich tacky black dustless clay. On Friday, by the luck of a blind draw, the field will be split into 10 heat races. Those who start in the back will benefit by points given for each car passed.

The host hotel for the East Coast Indoor Dirt Nationals is the Hampton Inn in Bordentown, NJ. A limited amount of rooms held at a special discount are currently available through a link on the series web-site.

Event sponsorship ranging from title sponsor to “Dirt” sponsors are available and being actively sought to help support the event. Interested parties should contact Danny Sammons at 609-888-3618 or via e-mail at danny@aarn.com.

Visit the series website www.indoorautoracing.com for more information including entry forms, rules, host hotels and ticket information for all events.