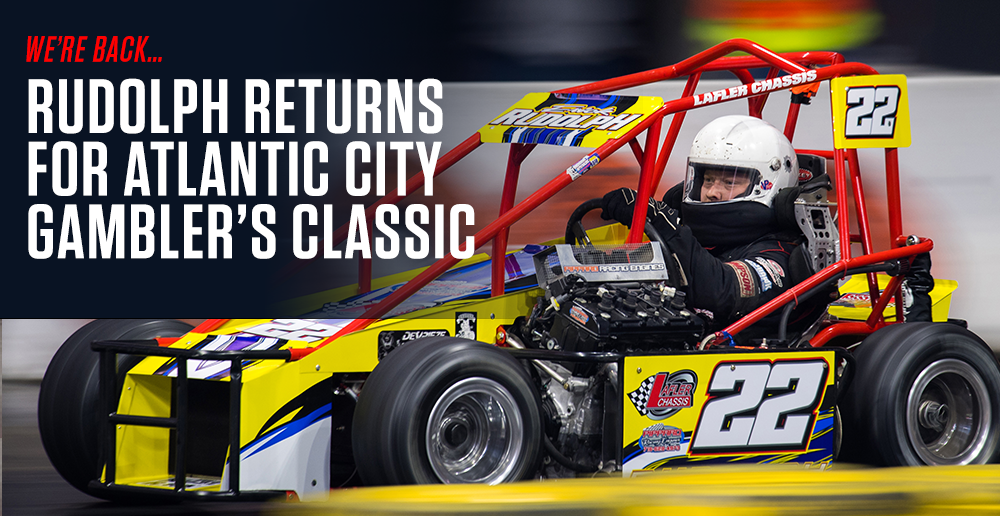 ATLANTIC CITY, NJ. JANUARY 13, 2022 . . . The Indoor Auto Racing Series TQ Midget one-two punch of Ryan Flores and Andy Jankowiak may have dominated the 2022 opener in Allentown, PA on January 8, but as the Series heads for Boardwalk Hall in Atlantic City, NJ on January 28-29 for NAPA KNOW HOW weekend, they’ll have to contend with Erick Rudolph.

Rudolph, who was missing in action in Allentown, is a three-time Atlantic City Boardwalk Hall Gamblers’ Classic winner (2012, 2015, 2017).  Each of Rudolph’s wins have come with the potent Mark Lafler-built and owned No. 22.

“Looking forward to being there, and grateful to be Mark’s driver for all these years,” Rudolph said.

“It will good to be back in Atlantic City where Mark and I have always had good runs.”

Rudolph said the No. 22 car is essentially the same one he raced to his last Indoor Auto Racing Series win in Atlantic City, in 2017. The upstate New Yorker said he always enjoys racing in Boardwalk Hall and is looking forward to his return after a one-year Covid-19 cancellation last year.

When Rudolph and Lafler first teamed for the Indoor Auto Racing Series, it was essentially another step forward together for the driver and owner.

“I was interested in the Indoor Series because I had raced Midgets before I got into Stock Cars, starting when I was 13 years old. Midgets were my transition from go-karts to Stock Cars. I had known Mark from back when I ran Midgets,” Rudolph shared.

“So when I started driving his TQ Midgets indoors, it wasn’t something I was totally unfamiliar with. For the whole time I’ve run indoors, it has always been with Mark.”

Flores, a New Jersey native now living in North Carolina, won over Jankowiak in the Indoor series showdown opener in Allentown PA. Both are past NAPA KNOW HOW Gamblers Classic winners, Flores in 2018 and Jankowiak in 2019 and 2020.

“Indoor Auto Racing is a spectacle in itself, and when the racing is as tightly contested as it was in Allentown last week, the fans had to be leaving eager for more,” said Series promoter Len Sammons.

And they’ll get more in Atlantic City. Along with the great nightlife and famed restaurants that make the trip to south jersey special, the competition level in the TQ Midget division has never been higher.

Three-time Atlantic City winner (2013, 2014, 2015) Anthony Sesely flexed his muscle at the opener. The fan-favorite from Matawan, NJ won the Dash and led the early laps of the feature before being involved in a mishap with Billy Pauch Jr. He rallied back to finish tenth.

Pauch, a winner in one of three Friday night Triple 20s in Allentown was making his first start in a Jason Simmons Racing No. 98. Because his sister is being married on Saturday night of AC weekend, he won’t be competing but the car will be a contender with a yet-to-be-named top driving star behind the wheel.

Versatile Max McLaughlin of Mooresville, NC is also expected to be a contender in Atlantic City. In his first ever TQ start in Allentown driving for Frankie Caparra, McLaughlin struggled to find the set-up, but rallied on Saturday to qualify for the A-Main against a stout field of 43 competitors.

Mike Christopher has already made a name for himself at the Stafford Motor Speedway in SK Modified competition, a track with his uncle is the all-time winningest driver. He’d like nothing more to go back to victory lane in Atlantic City, where as a young boy he joined his uncle in post-race celebrations!

Scott Kreuetter, the senior team member of the Hoddick team, showed how much speed they have finishing a solid fifth in Allentown. Kyle Hutchinson, who now drives the Donny Preece No. 13 that TC made famous in Indoor Racing, is also expected to be in the hunt.

Another set of teammates, veteran Matt Janisch of Nazareth, PA and young gun Briggs Danner are expected to contend for a first Atlantic City win. Janisch charged through the field to finish third at Allentown. Danner, of Allentown, was in contention until a late race accident sent him to the rear of the field.

ATQMRA outdoor series champion Joey Bailey of Monroe Township, N.J. is expected to be a challenger at the front of the field as well in Lenny Boyd’s iconic yellow No.1.

Others to keep an eye on are three Catalano brothers from Ontario, N.Y. Older brother Tommy, a regular on the NASCAR Modified Tour, led the early laps of the Allentown feature.

Tim Buckwalter and Matt Roselli showed speed while winning the other two Triple 20 races in Allentown. Another PA driver, Pat Bealer, was named the Hard Charger of the race after advancing 18 spots in Saturday’s feature to finish sixth.

Racing at the NAPA KNOW HOW Weekend will again include triple 20 qualifiers for the headline TQ Midgets on Friday night followed the 40 lap Gambler’s Classic on Saturday.

The wild and crazy Slingshots and darty Champ Karts will make up the tripleheader programs which includes qualifying races for each division each day.

Good tickets for the Atlantic City races are on sale now in a range of prices through Ticketmaster, the Boardwalk Hall Box Office or the Area Auto Racing News office at 609-888-3618 weekdays from 10 am to 4 pm. Further information on the event including special hotel rates are available at indoorracing.com.