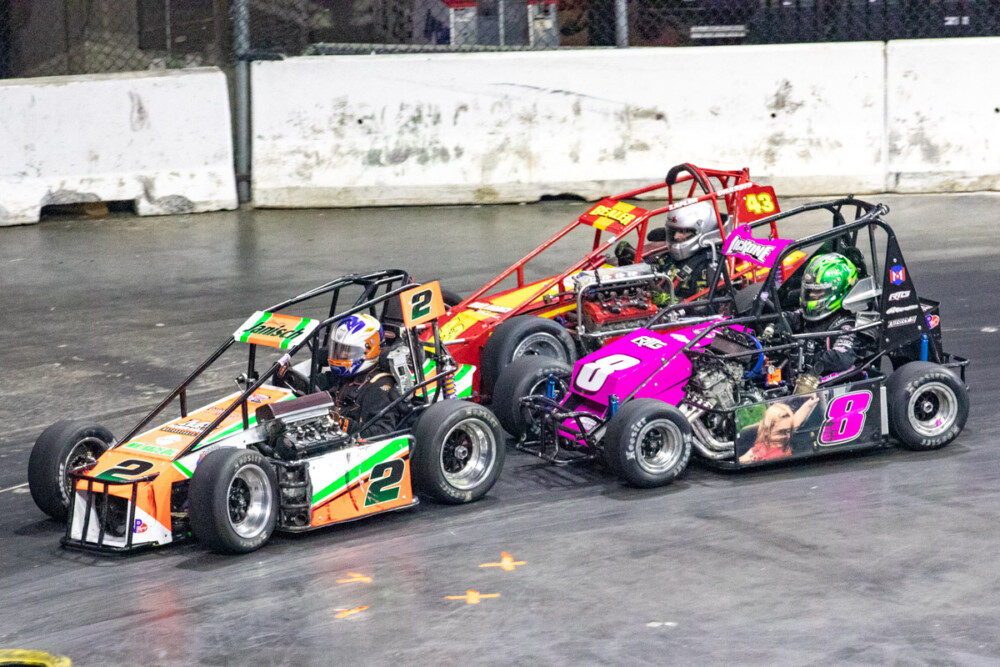 Tickets are available in advance at a range of different prices through links on www.indoorautoracing.com and the venue box office the day of the events.

While much of the Syracuse weekend revolves around the torrid point championship chases, the entry of New Englander Mike Christopher, Jr., who will be making his first start in a TQ Midget, is noteworthy.

Christopher will race a team car to Scott Kreutter, which was built by Buffalo, NY’s Trey Hoddick.  Christopher’s uncle, the late Ted Christopher, won eight Indoor series feature events and two Series championships. “TC”, who the championship Cup for the TQs is now named, was driving for Hoddick before his death in a plane crash in September of 2017.

The race for the 2020 BELFOR Concrete Series TQ championship has become essentially a four driver race with the two features in Syracuse remaining.

The point award differential between finishing first and second is ten points. The spread between first and last in a feature is 83 markers. With a complete show including a 40 lap feature both nights in Syracuse, one bad night by any of the front runners could torpedo their bid for the title.

Rudolph came into the 2019 inaugural running of the Syracuse event in a battle with Justin Bonsignore and others for the championship. Bonsignore, the 2018 champion, appeared to have the upper hand after winning on Friday’s inaugural event in the new building, but this hopes dissipated after he crashed heavily on Saturday night.

The large point spread and two complete shows in Syracuse could open the door for teenage sensation Briggs Danner of Allentown, PA who is 36 points out of the point lead. Anthony Payne, Fairlawn, NJ, who rides 44 behind the lead and Ryan Bartlett of Watertown, NY, who is 66 points out of the lead, also have a chance at the title should the leaders struggle.

The points chase in both the Slingshot and Champ Kart classes is more sharply defined.

Scott Neary, Columbia, NJ is atop the leaderboard with a 35 point margin over Brett Bieber and Cody Kline.

Kurt Bettler, winless in the four Series Slingshot races in 2019, outpointed Danny Buccafusca to win the title. An even dozen Slingshot hopefuls came into the finale with a mathematical chance to win the coveted title.

Tyler Brown has a 44 point bulge on Todd Crenshaw and a 54 point margin over Ron Midford, Jr. in the Champ Kart division. Brown, of Richfield, Pa., the hired gun of Jason Simmons’ multi-car race team out of Fulton, N.Y., won the Saturday night event in Syracuse last year. Brown has previously won Indoor Series events in Albany, N.Y.’s Times Union Center in 2012 and this year in Allentown, Pa. to start the 2020 season.

Six Champ Kart competitors were in contention for the Series crown last season with Brandon Rucszek winning the laurels ahead of Ryan Kendall and JJ Pacovich.

Corporate sponsorship at a variety of levels to meet every budget is available for the Syracuse event. Interested parties should contact Danny Sammons at 609-888-3618 or e-mail danny@aarn.com.