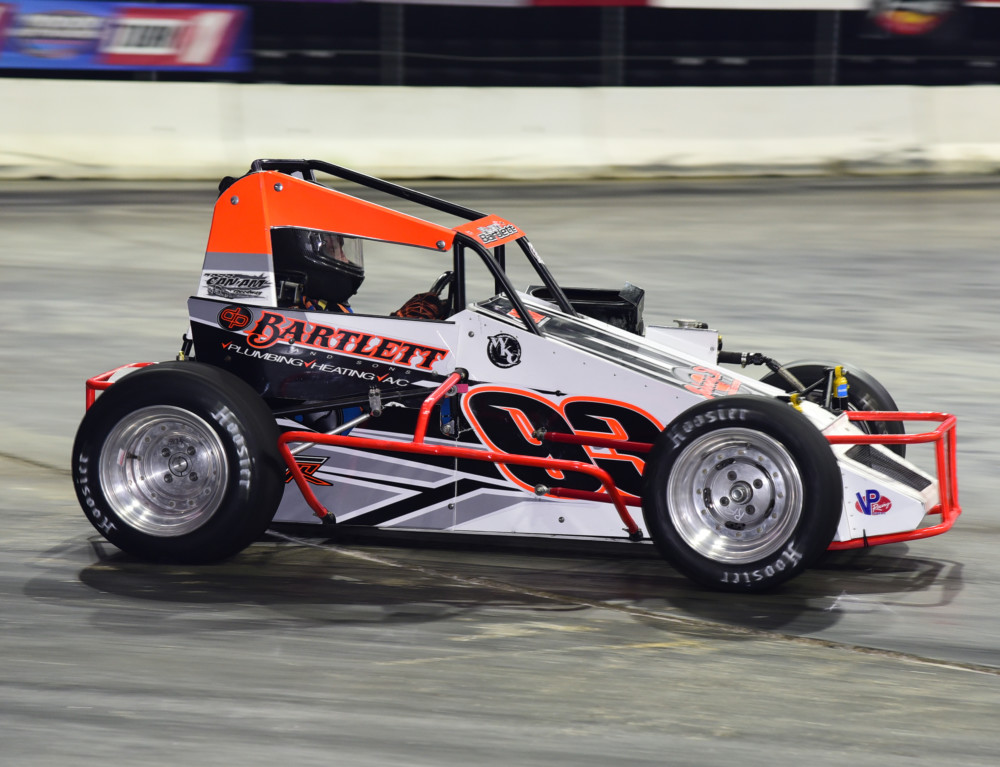 “Other than Tyler Thompson who lives in Fulton, I’m the home town guy for the Syracuse Indoor races,” Bartlett, 37, said.

The 2020 BELFOR Property Restoration TQ Midget, Champ Kart, and Slingshot Indoor Series Concrete championships will be determined after two complete shows are held on Friday and Saturday, March 13-14. Both nights will include qualifying and feature events for not only the headline TQ Midgets but the Slingshots and Champ Karts as well.

Since purchasing a new TQ Midget in the off-season, Bartlett has emerged from a mid-pack runner to a contender in the three feature races held so far this season.

Bartlett left the Atlantic City Gambler’s Classic racing weekend on February 1 sitting seventh in points; he had been second following the first two races, run back to back in Allentown, PA.

Bartlett and his father David bought the TQ from Lenny and Donna Boyd. It has made a huge difference.

“The car was race ready. Lenny (Boyd) had the motor freshened and the car was set up for the Allentown race when he sold it to us,” Bartlett said. “He shared the last two years of Indoor racing notes with me. It really only took me a couple of laps to get the feel for the car,” Bartlett said.

Bartlett brings a wealth of experience to Syracuse. His father and his team have Indoor TQ Midget roots that date back to 1998 at Niagara Falls Convention Center.

“I raced in that building until it closed and that’s when Len (Sammons) started this Series. “I’ve entered every single one of his races except for the year when they raced over New Year’s Day weekend in Providence (Rhode Island),” Bartlett said.

Bartlett says the Syracuse track was similar in size to the Allentown track where he ran so well in January. But that’s as far as the comparison goes.

“The new concrete in Syracuse made the floor a lot more slippery than Allentown last March. With the dirt track experience I have, slippery is fine with me,” shared Bartlett.

Bartlett anticipates a cheering section of at least 50 people from Watertown, N.Y. who will be in the arena rooting for his No. 93. With the new equipment have come greater expectations.

“In years past, I was just happy to qualify for the feature. Now, we all expect a top ten finish at the minimum and a top five is realistic.,” he predicted.

In the two Allentown races in early January, Bartlett registered a fifth and seventh place finishes in the two features.

“In the second race on Saturday, the track started to get real slippery. That’s when my dirt track experience kicked in. I hope Syracuse gets that way,” Bartlett summed.

The race for the 2020 BELFOR Concrete Series TQ championship has become essentially a four driver race with the two features in Syracuse this weekend to determine the outcome.

The point award differential between finishing first and second is ten points. The spread between first and last in a feature is 83 markers. With a complete show including a 40 lap feature both nights in Syracuse, one bad night by any of the front runners could torpedo their bid for the title.

The points chase in both the Slingshot and Champ Kart classes is more sharply defined.

Scott Neary, Columbia, NJ is atop the leaderboard with a 35 point margin over Brett Bieber and Cody Kline.

Tyler Brown has a 44 point bulge on Todd Crenshaw and a 54 point margin over Ron Midford, Jr. in the Champ Kart division. Brown, of Richfield, PA, the hired gun of Jason Simmons’ multi-car race team out of Fulton, NY, won the Saturday night

Tickets are available in advance at a range of different prices through a link on www.indoorautoracing.com and the venue box office the day of the events.