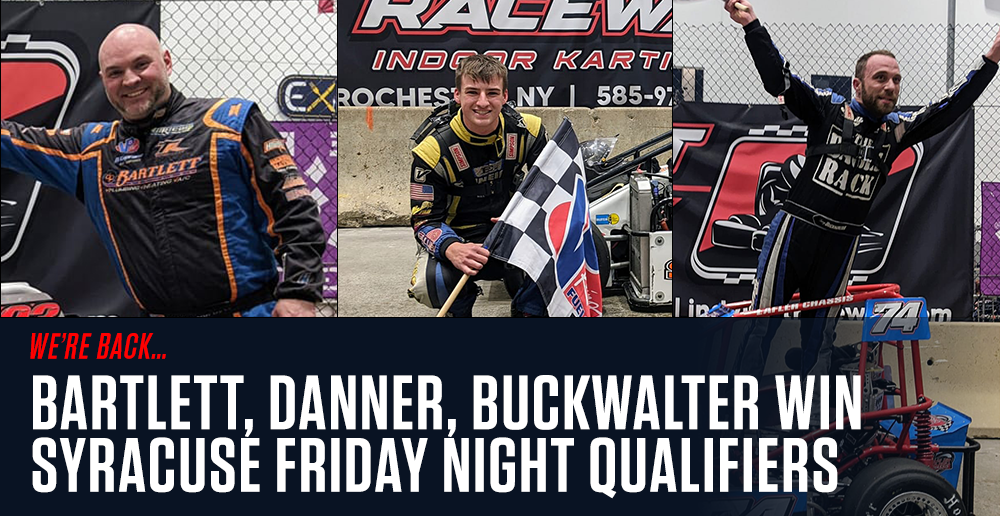 Syracuse, NY (Mar. 11) – Ryan Bartlett, Briggs Danner and Tim Buckwalter raced their way to victories Friday night in a trio of 20-lap TQ Midget Qualifiers. The top three finishers in each of the three races punched their tickets to the Saturday night finale.

Bartlett was trailed by Timmy Solomito and Anthony Sesely in the first Qualifier. Sesely and Andy Jankowiak, who had set a new track record in the ‘Fast Twelve Time Trials at 6.891 tangled while racing for the lead, with Sesely spinning and Jankowiak penalized for his role in the Sesely spin. Sesely returned to qualify, while Jankowiak missed making the cut from the Qualifier by one spot. The race was stopped several other times for minor mishaps.

Danner’s win in the second Qualifier came in a radically different race from the first in that it ran non-stop. Joey Bailey led most of the race but half spun off the fourth turn with a handful of laps left. Danner took the lead to win it with Tommy Catalano and Erick Rudolph placing second and third. Bailey was fourth.

Tim Buckwalter won the third Qualifier with a late race pass of Shawn Nye who had led most race. Scott Kreutter was second with Nye falling to third at the finish. The race was red flagged for a spectacular crash involving Matt Janisch, who caught a wheel of another competitor while driving off turn two. His car was launched into the air, flipping spectacularly before coming to rest upside down.  Janisch was able to step from his car after a few moments, was conscious, and walked from the accident scene. He was later transported to an area hospital for observation.

TQ heat winners, which established the running order for the Triple Twenties Qualifiers, were won by Bartlett, Mike Christopher, Jr. and Matt Janisch.

Day Two of the indoor Auto Racing Series Syracuse Exposition Center event on Saturday night will feature TQ Qualifiers, Champ Kart and Slingshot B Mains, a TQ Dash for the nine Friday Night Qualifiers to set the starting field order for the first three rows of the A-Main feature which will run for 40 laps.