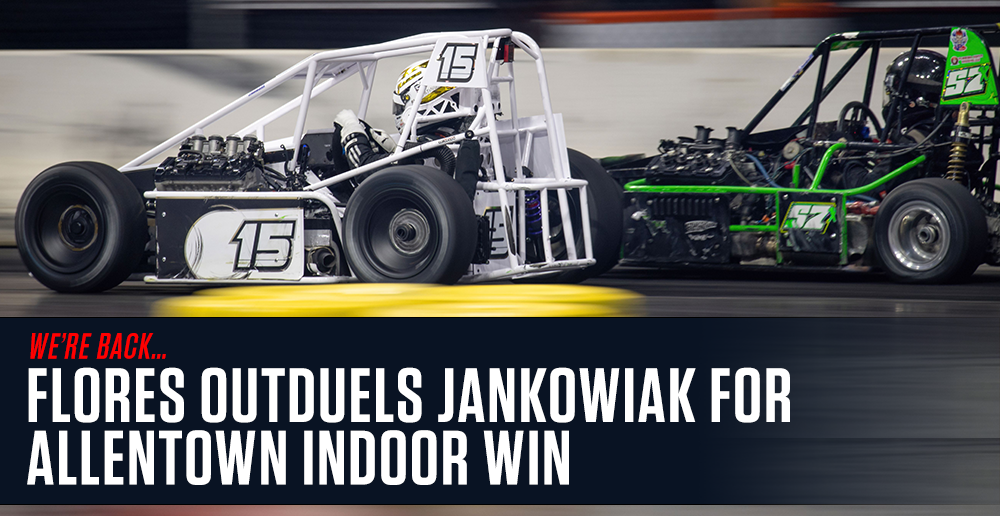 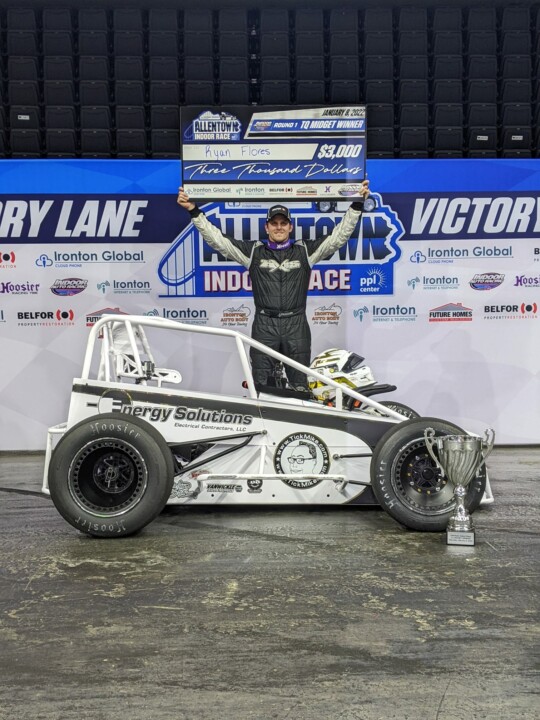 Allentown, PA – Ryan Flores of Davidson, NC raced to victory Saturday night in the Indoor Auto Racing Series Fueled By VP 2022 season opener inside Allentown, PA’s PPL Center. To win, Flores had to hold off the race-long challenges of Andy Jankowiak of Tonawanda, NY while Lehigh Valley, PA native Matt Janisch of Nazareth, PA charged from deep in the field to finish a solid third.
The win was Flores’ fifth in the PPL Center, including the most recent previous race run on January 4, 2020.
In support class action, Jon Keister of Millmont, PA won the 20-lap Champ Kart feature, and Brett Bieber of Oley, PA won the 20-lap Slingshot main event.
“Getting out in front and being able to manage the restarts was the key to winning,” Flores said. “Andy (Jankowiak) and I have battled for wins before and we raced each other hard again tonight.”
Jankowiak, who pulled alongside Flores immediately after the race was over to offer his congratulations to the winner, was resigned to his runner-up result.
“I think Ryan and I had the two best cars here all weekend. Whoever got out in front first was probably going to win it but the restarts kept it close. We brushed each other a couple of times and I brushed the wall a couple of times. I’ve never run well in the Allentown Indoor races so I’ll take second, consider it a good points night, and move on to Atlantic City.”
Third place finisher Janisch, who started 11th, lost several spots early in the race when he was pinned down in heavy traffic. But he fought back to gain a podium finish.
“When I got shoved back there, I found that the top line was the place my car worked best, and I spent the rest of the race moving by guys on the top. I wish I had found out my car ran so well up there earlier than I did,” Janisch shared.
Tim Buckwalter and Scott Kreutter were fourth and fifth. Pat Bealer, who started 20th, and finished sixth, received the race’s Hard Charger Award.
Seventh through tenth were Mike Bednar, Shawn Nye, Billy Pauch, Jr., who ran as high as third until spinning with six laps left, and Anthony Sesely, who started first, dropped back, and ultimately was penalized for overly aggressive driving in the Pauch mishap.
For TQ heat races Saturday were won by Ryan Susice, Janisch, Kreutter, and Briggs Danner. Sesely won the TQ five-lap Dash. Max McLaughlin and Shawn Nye were the twin TQ B Main race winners.
Jon Keister’s Champ Kart 20-lap feature win came in a race slowed just twice by caution flags for minor incidents. Tyler Brown, Missy Bootes, Chris Natoli, and Chase Keister completed the top five; apparent race runner-up Todd Crenshaw was disqualified after a technical violation was discovered in post-race inspection. Bootes won the B-Main qualifier earlier in the program. 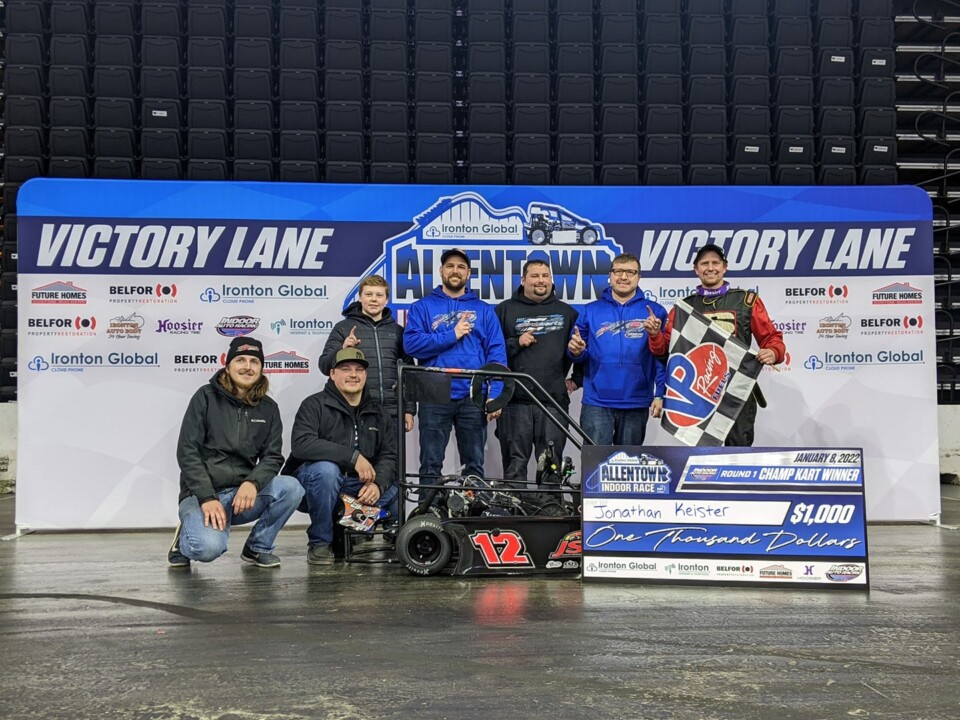 Brett Bieber passed teammates Jared Silfee and Scott Neary to complete a late-race charge to victory in the 20-lap Slingshot feature. Silfee, Neary, Louden Reimert and Cody Kline were the rest of the top five. Alex Reinsmith won the B Main qualifier. 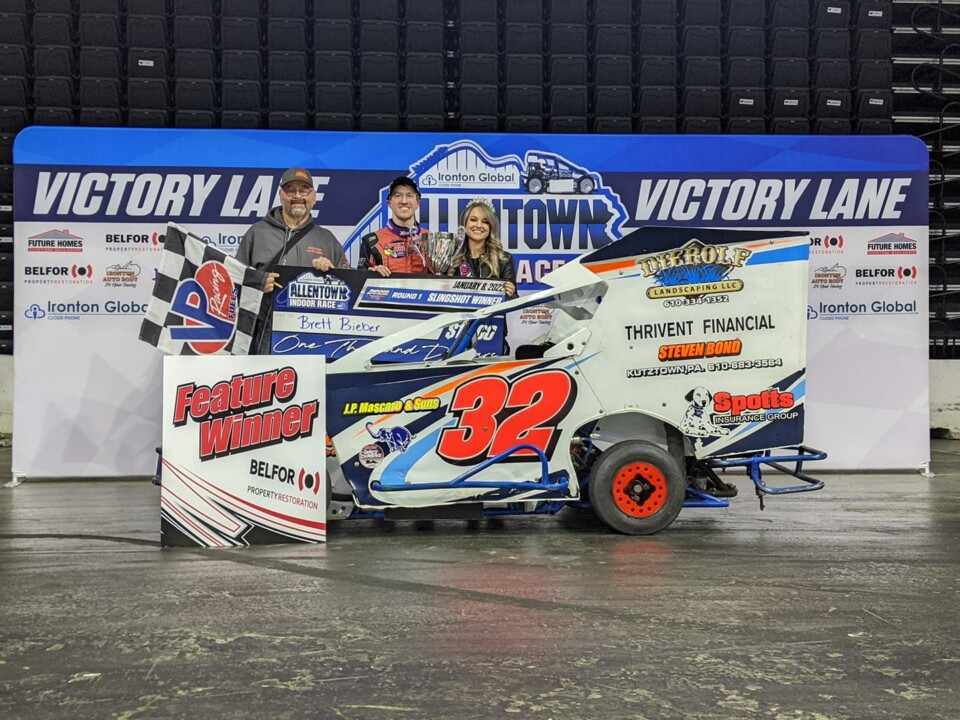