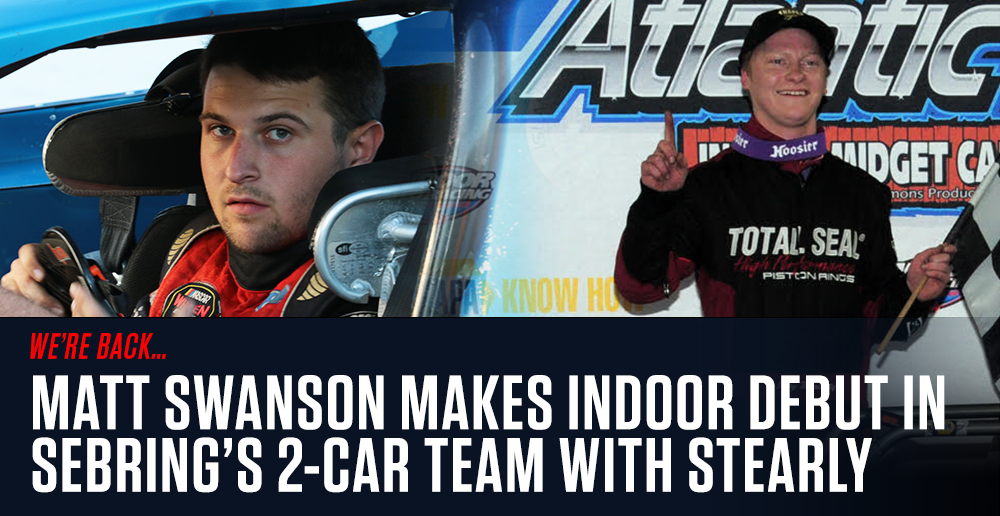 “We are really excited to have Matt join us this weekend,” said Sebring. “He’s a great kid with a ton of talent. We’ve worked together a couple of times over the years racing Modifieds so we know he’s a good fit for our team.”

Despite his young age, Swanson is a seasoned competitor with a unique versatility. He has found success on the NASCAR Whelen Modified Tour as well as the Tri-Track Open Modified Series, Modified Racing Series and in open Modified events. He was the 2016 NASCAR Whelen Modified Tour Rookie of the Year at only 16 years of age. Before making the jump to Modified racing at the age of 14, Swanson scored over 100 victories in go-karts and Quarter Midgets. He has also competed successfully in Midgets and Super Late Models.

It was announced earlier this year that, in addition to a busy schedule in tour-type Modified competition, Swanson will vie for the championship in the ultra-competitive SK Modified ® division at Stafford Motor Speedway for car owner Tom Bolles.

“Running a TQ indoors is something that I have wanted to do for a longtime,” said Swanson. “To do it with a team that I have history with is important. And, to race a car built by 2Kwik Chassis means I am in the best equipment; making this such a great opportunity for me.”

Not a complete stranger to this type of racing, Swanson competed in both winged and non-winged 600 micro sprints in central Pennsylvania in 2013; even winning in his first start on dirt at Hamlin Speedway.

Stearly, who is also a rookie in the TQ ranks, will continue to pilot the team’s 2Kwik Chassis #21. The go-kart racing ace has participated in the two preceding indoor events for the team with positive results. Stearly is an accomplished go-kart racer with countless victories throughout the northeast including the Indoor Auto Racing Championship Series.

“I have worked with Rick [Kluth of 2Kwik Chassis] since starting this team in 2016,” added Sebring. “This new car that he and Jeff [Ulrich] designed is definitely going to be among the ones to beat and I’m glad to be able to be involved at the beginning.”

Swanson becomes the most recent to join a strong slate of drivers that have competed for Sebring; including former indoor champion Andy Jankowiak, Bobby Holmes, Timmy Solomito, Jonathan Reid, Tony DiMattia and DIRT Modified star Marc Johnson. The team has also competed in outdoor events on a limited basis with the ATQMRA TQ Midget Series and NYPA Midget Association.

“The goal is to find speed quickly to run consistently and competitively in all the rounds of qualifying to set both Matt and Doug up for the opportunity to win,” added Sebring.

Practice and qualifying at Syracuse gets underway on Friday with time trials for the TQ and Triple 20s. Qualifying events will also be held for the TQ Midgets, Slingshots and Champ Karts. On Saturday, qualifying races will again be held for the three divisions followed by feature events. For complete details visit indoorautoracing.com