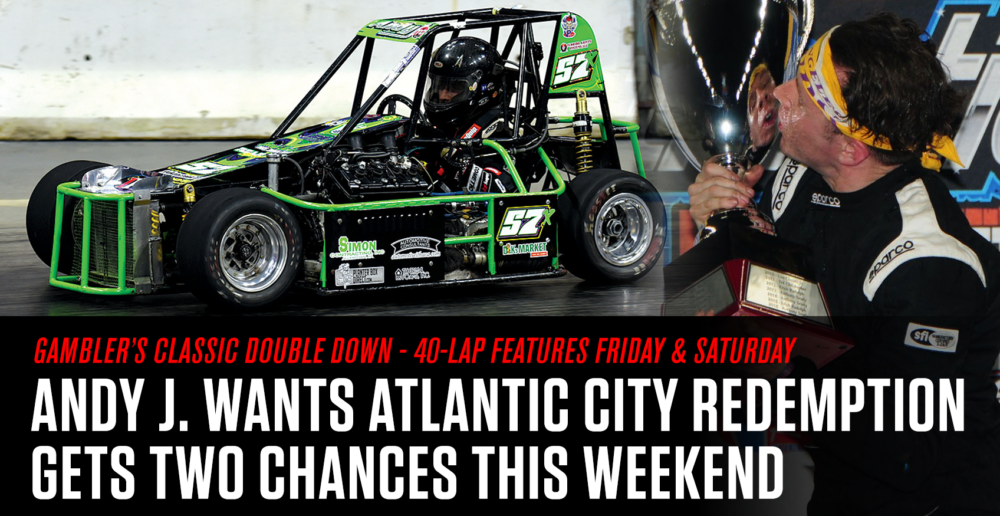 Three Out Of Four Wouldn’t Be Bad For Andy Jankowiak At Boardwalk Hall; Two Time Winner Came Up Empty In 2022; Has Two Chances This Year With ‘Double Down’ Two Feature Format

Andy Jankowiak might have been the happiest winner in Atlantic City history when he won the Gambler’s Classic for the first time in 2019. The Tonawanda, N.Y. driver was equally as thrilled when he won again in 2020.

Last year, however, he left Boardwalk Hall less than thrilled when he tangled with race leader Erick Rudolph late in the race and was sent to the rear. His hopes for a three-peat were over.

Jankowiak will have two chances to even the score when the Indoor Auto Racing Series fueled by VP heads to Boardwalk Hall in Atlantic City this weekend where two Gambler’s Classic winner’s trophies will be presented.

This year’s NAPA Auto Parts race weekend will consist of two complete TQ Midget programs – a “Double Down” schedule – with one Gambler’s Classic for the BELFOR Property Restoration sponsored TQ Midgets on Friday, January 27th and a second one on Saturday the 28th. Each day will have its own set of qualifying races leading up to the 40 lap feature event.

Jankowiak was in the hunt to win the 2022 series finale in Syracuse despite going to the rear after an early race tangle. Trying to pass leader Ryan Bartlett in the final laps on the outside, the two got together. Andy J. road up the wall, flipped to his side and slid down the backstretch. When he got to turn three the car drove around concrete wall before going back on it’s wheels in turn three. He didn’t win it, but he was spectacular.

At the series opener in Allentown, Jankowiak was again in the hunt. There he battled up front early, but faded to a sixth-place finish.

If he doesn’t win on Friday, there will always be Saturday to try again. If he was to win them both, it wouldn’t be a surprise but a celebration.

On Friday night, January 27th the BELFOR Property Restoration sponsored TQ Midgets will compete in qualifying events followed by a 40 lap Gambler’s Classic that was postponed in 2021 because of Covid-19 fan restrictions.

The headline TQ Midgets will do it all over on Saturday, January 28th with the big night ending with the 2023 Gambler’s Classic. On both nights, the winner will raise the iconic trophy.

Joining the TQ Midgets will be the Slingshots, sponsored by Pa.’s Kutztown Action Track, the Hoosier Tire Champ Karts and the 600cc Dirt Micro Sprints. They’ll run qualifying events on Friday and features on Saturday night.

Prior to Saturday’s event Fan Fest will be held on the racing surface for those with lower level reserved tickets from 5 to 6:15. Drivers from the event, as well as, NHRA Funny Car champion Ron Capps will be signing autographs.

Once Indoor Auto Racing Series fueled by VP point are calculated, the 2023 champion will be presented the TC Cup Trophy.

This prestigious award is named in the honor of the 2010 and 2011 champion who lost his life in a plane crash in 2017 after winning seven Indoor Racing Series events.

Good seats for both nights remain available at Ticketmaster, a direct link is available from the series web-site, indoorautoracing.com, or daily at the Boardwalk Hall Box Office where the price is increased by $5 the day of the event.