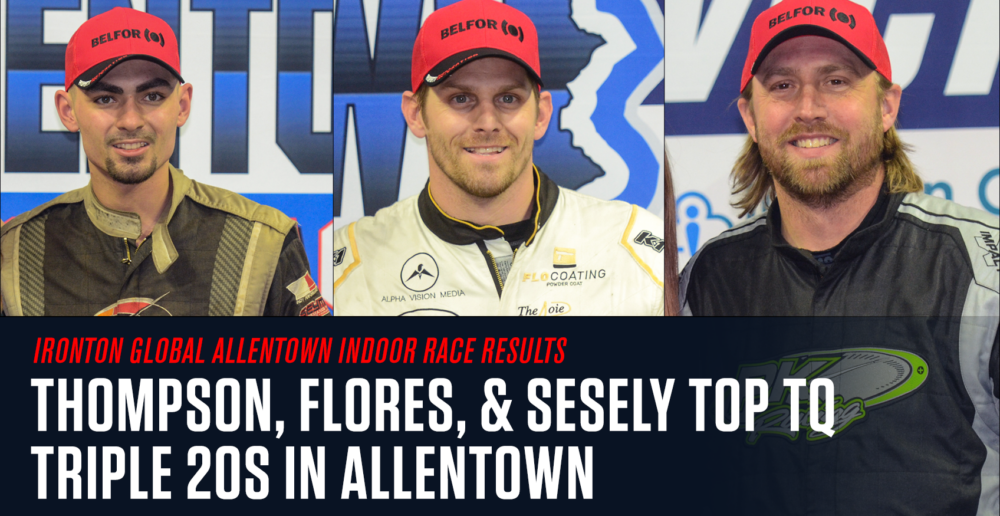 Friday’s events were the first of two nights of Ironton Global Allentown Indoor Race action. TQ Midgets return Saturday night to run a 40-lap A-Main event along with the Champ Karts and Slingshots in a second night of action.

“I knew I had to take the bottom lane on the final restart,” Thompson declared after beating Scott Kreutter, 2022 Indoor Auto Racing Series Champion. “It was a tough race, my right hand was cramping up for the last couple of laps but I held him off.”  Finishing third through fifth were Shawn Nye, Ryan Bartlett and Ryan Susice.

Flores was dominant in the second Triple Twenty, holding off Andy Jankowiak and Mike Christopher, Jr. “The car was good all day and we got it a little better for the feature. That made the difference,” Flores noted, referring to the way he was able to maintain a car length lead over Jankowiak over the final two laps. Third through fifth were Jeremy Haudricourt, Mike Christopher, Jr. and Tyler Wagner.

Sesely overpowered Timmy Catalano two laps into the feature, then held off a determined Briggs Danner to prevail. Sesely was driving the same car he won last season’s Syracuse Indoor Race and was able to extend a sizeable lead until a late race caution put Danner on Sesely’s  back bumper. “I had a choice of two cars Ricky Kluth brought here and the 44 car I raced was by far the better of the two,” Sesely explained. “But in the final couple of laps I knew Briggs (Danner) was right there.” Third through fifth were Joey Bailey, Tommy Catalano, and Steve Kemery.