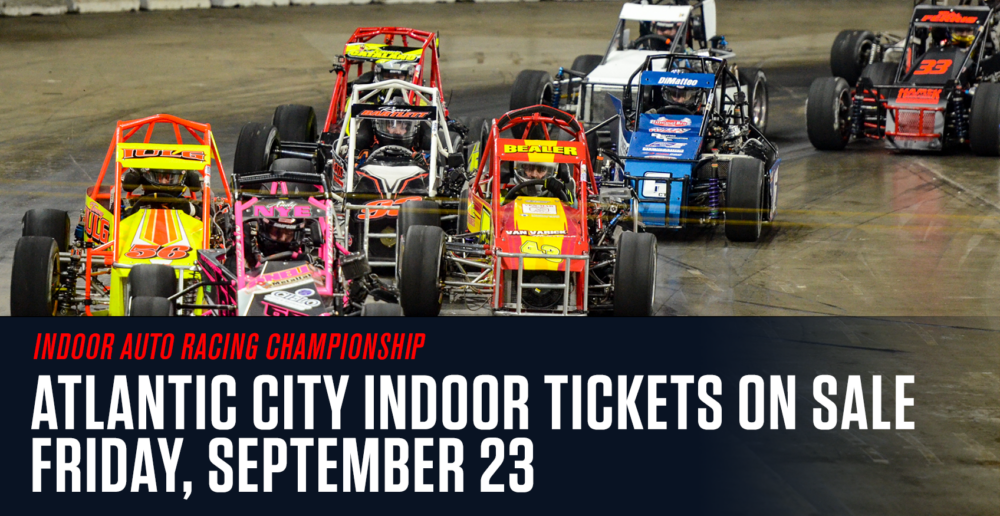 Indoor PR2022-09-22T13:51:51-04:00
By Indoor PR Uncategorized 0 Comments
Atlantic City, NJ  –  The roar of engines will return to Jim Whelan Boardwalk Hall on for the 20th running of the NAPA KNOW HOW Atlantic City Indoor Races on Friday and Saturday January 27 and 28.
The 20th running of the Atlantic City Indoor Races will feature an double down schedule, with two main events and two Gambler’s Cup trophies being handed out, one on Friday night and Saturday night.
During the “double down” weekend driver’s in the main division, the TQ Midgets, will have two opportunites to host the Gambler’s Classic trophy.   Friday night will feature a complete show, making up the 2021 event that was lost to COVID restrictions.  Then on Saturday night, start all over with heat races, B-mains and another 40 lap main event!
“2023 will be our 20th running of the event in Atlantic City and we are going all in to make it the best weekend yet” stated series promoter Len Sammons.   “We lost our 2021 event to COVID and then we were affected by the big snow storm last year, in true Atlantic City fashion for 2023 we are putting it all on the line to make 2023 bigger and better for our racers and most importantly our fans.”
The Indoor series will kick off its 2023 campaign in Allentown, PA at the PPL Center on January 6 and 7 with the 7th running of the Ironton Global sponsored events.
Tickets go on sale to the public on Friday, September 23.
Atlantic City Indoor Race tickets will be available online via Ticketmaster.com or at the Box Office.
For more information visit the series website www.indoorracing.com.